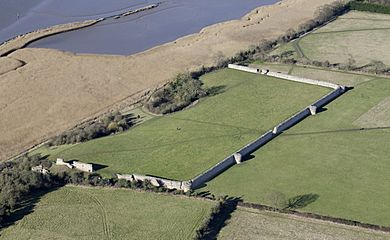 The Roman fort remains from above 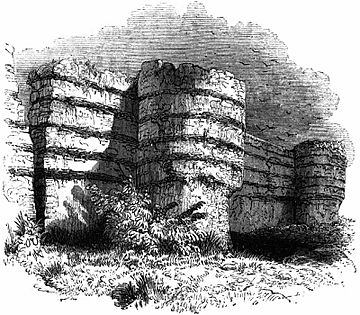 Burgh Castle is a village and civil parish in the English county of Norfolk. It is situated on the east bank of the River Waveney, some 3.7 miles (6.0 km) west of Great Yarmouth and within the Norfolk Broads National Park. The parish was part of Suffolk until 1974.

Burgh Castle is the site of one of several Roman forts constructed to hold troops as a defence against Saxon raids up the rivers of the east and south coasts of southern Britain (the Saxon Shore). Possibly the fort was called Gariannonum, a name that appears in one original source; the identification was once thought secure, but is now thought debatable by some specialists. The fort is roughly rectangular, approximately 205 m (673 ft) by 100 m (330 ft), with three of the tall massively built walls still extant; the fourth has fallen into what was once an estuary but is now a marsh, Breydon Water.

The site is owned by the Norfolk Archaeological Trust, with the walls in the care of English Heritage. The site is freely open to the public and has a major access and interpretation scheme created by the Trust, with funding and collaboration from Natural England and English Heritage. There is a timber viewing platform overlooking the rivers and marshes, which provides an ideal spot for wildlife observation.

Since William Camden, Burgh Castle has been suggested as the site of Cnobheresburg, the unknown place (a castrum or fort) in East Anglia, where in about 630 the first Irish monastery in southern England was founded by Saint Fursey as part of the Hiberno-Scottish mission described by Bede. Historians find many arguments against this location, but are unable to agree on a better one. The Roman fort at Burgh Castle was excavated by Charles Green during 1958–61. A detailed report by Norfolk Museums Service in 1983 (East Anglian Archaeology 20) found no evidence of any monastic settlement in Burgh Castle itself.

The church of Burgh Castle, St Peter and St Paul, one of 124 existing round-tower churches in Norfolk, has been a Grade II* listed building since November 1954. The majority of the church building dates from the 13th and 15th centuries. Points of interest include a well-preserved 14th-century "East Anglian Lion Font" and some magnificent stained glass windows, especially the small lancet "Fursey" window. In 2015 the first stage of a major restoration programme, repairs to the north aisle, was completed. The church is open daily from 10am to 5pm April to October and at weekends from 10am to 3pm during March and November.

The civil parish of Burgh Castle has an area of 1,670 acres (680 ha) and in the 2001 census had a population of 955 in 376 households. For the purposes of local government, the parish today falls within the district of Great Yarmouth. However prior to the Local Government Act 1972, the parish was within Lothingland Rural District in Suffolk.

The House of Burke take the original form of their surname de Burgh, from the area.

All content from Kiddle encyclopedia articles (including the article images and facts) can be freely used under Attribution-ShareAlike license, unless stated otherwise. Cite this article:
Burgh Castle Facts for Kids. Kiddle Encyclopedia.