Kids Encyclopedia Facts
Not to be confused with Burleson, Texas. 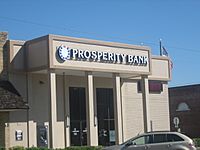 Prosperity Bank is located across the street from the Burleson County Courthouse in Caldwell. 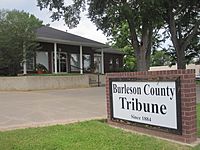 Burleson County ( BUR-li-sən) is a county located in the U.S. state of Texas. As of the 2010 census, the population was 17,187. Its county seat is Caldwell. The county is named for Edward Burleson, a general and statesman of the Texas Revolution.

From 1975 to 1995, the Burleson county judge, who presides over the commissioner's court, were the son and father team of Mark Steglich Caperton (born 1946), a Caldwell attorney, and Woods Allen Caperton (1920-2009). Mark Caperton was the judge from 1975 to 1983 and was succeeded by his father, a former agent of the United States Soil Conservation Service. Woods Caperton also served seventeen years as a member of the Caldwell Independent School District and was a member too of the Burleson County Hospital District. During his time on each board, a new high school and hospital were begun. Woods Caperton was also chairman of the Brazos Valley Development Council and the Brazos Valley Mental Health Mental Retardation Center. He founded the Caldwell Cub Scouts and was instrumental in the development of the Caldwell Little League. Another son, Kent Caperton, served from 1981 to 1991 as the District 5 state senator. Kent Caperton, formerly of Bryan, is a lobbyist and lawyer in Austin.

The current state representative for Burleson County is the Caldwell attorney Leighton Schubert, a Republican.

All content from Kiddle encyclopedia articles (including the article images and facts) can be freely used under Attribution-ShareAlike license, unless stated otherwise. Cite this article:
Burleson County, Texas Facts for Kids. Kiddle Encyclopedia.