Burlington is a town in Otsego County, New York, United States. The population was 1,140 at the 2010 census.

The Town of Burlington is in the northwest part of the county and is north of Oneonta.

Butternut Creek and Wharton Creek are important waterways in the town. 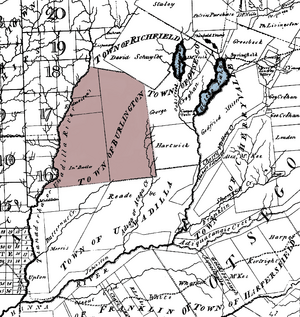 Burlington was formed from the Town of Otsego, April 10, 1792. It retained its original dimensions until 1797, when Pittsfield (and what would come to be New Lisbon) was set off. It was further diminished in area by the erection of Edmeston, in 1808.

The 1878 history describes the community of Burlington Green as having two churches, a general store, lawyer office, hotel, gristmill, creamery, two blacksmith shops, two wagon shops, a cooper and shoe shop and photography studio, but "This village at one time was a place of much more mercantile and manufacturing interest than at present, having a comb-factory, a hattery, two tanneries, an iron-foundry, a furniture-factory, three stores, two hotels, a cloth-dressing and wool carding-factory, and a card factory." The heavily textile based economy of the Butternut Valley was an influence in the number of sheep and immigrants that arrived from Scotland and established the United Presbyterian Church at Burlington Green June 8, 1835.

There were 392 households out of which 36.2% had children under the age of 18 living with them, 65.1% were married couples living together, 7.9% had a female householder with no husband present, and 23.2% were non-families. 18.6% of all households were made up of individuals and 8.2% had someone living alone who was 65 years of age or older. The average household size was 2.76 and the average family size was 3.08.

Communities and locations in the Town of Burlington

All content from Kiddle encyclopedia articles (including the article images and facts) can be freely used under Attribution-ShareAlike license, unless stated otherwise. Cite this article:
Burlington, New York Facts for Kids. Kiddle Encyclopedia.