Burton is a small residential suburb approximately 21 kilometres north of the CBD of Adelaide, South Australia. It is located five km north-west of Salisbury in the flat terrain of the Adelaide Plains. The suburb contains two wetland reserves, including Kaurna Park.

The Indigenous Australian Kaurna people occupied the land of Burton and surrounding Adelaide Plains area prior to European settlement. The first Methodist chapel (also used as a schoolroom) was built in the Burton area in 1858. 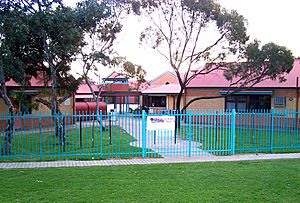 Burton Primary (Birth-7) is a local school which opened in 1990. It educates over 400 students each year. The students mainly come from low socio-economic backgrounds. In 2006, 30+% of the student population were School Card Holders. 40% of the student population came from Non-English Speaking Backgrounds and 15 nationalities were represented at the school. English as a Second Language (ESL) programs were given a high priority as were Maintenance of Mother Tongue (MTM). The two MTM languages offered were Khmer and Vietnamese.

Burton Primary was selected as an Apple Distinguished School, one of only 29 schools nationally. 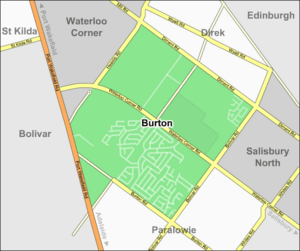 Public Transport in Burton is serviced by Adelaide Metro. Three main bus services pass through the streets of Burton:

All content from Kiddle encyclopedia articles (including the article images and facts) can be freely used under Attribution-ShareAlike license, unless stated otherwise. Cite this article:
Burton, South Australia Facts for Kids. Kiddle Encyclopedia.