In Texas, the Butterfield Overland Mail service created by Congress on March 3, 1857, operated until March 30, 1861. The route that was operated extended from San Francisco, California to Los Angeles, then across the Colorado Desert to Fort Yuma, then across New Mexico Territory via, Tucson and Mesilla, New Mexico to Franklin, Texas, midpoint on the route. The route through Texas followed first the northern route to the Pecos River and downstream to Horse Head Crossing. The route in West Texas was changed in 1859, in order to secure a better water supply on the route and to provide mail service to a more settled area, the stages between Franklin and the Pecos River followed the San Antonio-El Paso Road to Camp Stockton and then turned east to Horsehead Crossing. From Horsehead Crossing the route crossed Texas to the Red River and into Indian Territory. In 1860 the route was changed to another route from Jacksboro to Sherman via Decatur due to the building of a new toll bridge at Bridgeport, that avoided delays crossing the West Fork of the Trinity River when it was flooded. From Colberts Ferry the route went on to Fort Smith, then up across Arkansas and southwest Missouri to Tipton with the final leg by train to St. Louis. The Texas mail route was so long that the route there, like that in California, was divided into two divisions each under a superintendent.

At first the 5th Division route left Franklin to run due east thirty miles to Hueco Tanks, thirty six miles to Cornudas de Los Alamos then east northeast fifty-six miles to Pinery Station. Subsequently, stations were added between Hueco Tanks and Cornudas de Los Alamos at Ojos de los Alamos, and at Crow Springs between Cornudas de Los Alamos and Pinery. From Pinery, the route then ran twenty-four miles east to Delaware Springs Station, then forty miles down Delaware Creek nearly to its junction with the Pecos River, and across Pope's Crossing to Pope's Camp. It then ran sixty five miles down the east bank of the Pecos, to Emigrant Crossing Station and onward fifty-five miles to Horsehead Crossing. Sections of this route, including Pinery Station, are preserved as part of Guadalupe Mountains National Park, and have been listed on the National Register of Historic Places.

From Horsehead Crossing the trail ran seventy waterless miles east northeast across the Llano Estacado to the headwaters of the Middle Concho River, then northward, about thirty miles through the vicinity of modern Carlsbad, to a camp or station;, then twenty-two miles to Grape Creek Station near the south line of present Coke County; to Fort Chadbourne in what is now Coke County.

In August 1859, the route in West Texas was changed from the upper route in order to secure a better water supply on the route, with more security from the Army and to provide mail service to a more settled area, by using the San Antonio-El Paso Road from Franklin to Camp Stockton before cutting across to link up with the rest of the route at Horsehead Crossing. This entailed abandoning the investment in the well constructed stations on the old route, and building some on the new route. Although this was mitigated when an arraignment was made to use the stations of George H. Giddings' San Antonio-El Paso Mail along that route. Losses from this change and debt taken on from a delay of postal revenue, eventually led the investors in the Overland Mail Company to take control and dismiss John Warren Butterfield in 1860.

The stages between Franklin and the Pecos River now would follow the San Antonio-El Paso Road down the Rio Grande, 14 miles from Franklin to Ysleta, then passing 121⁄4 miles through Socorro to San Elizario, then on 101⁄2 miles to Camp Hawkins Station, 24 1⁄2 miles to Birchville Station, 15 miles to Camp Rice Station, then 18 miles to Fort Quitman. Moving eastward away from the river at Fargo Station 51⁄2 miles below Fort Quitman, the route traveled 251⁄2 miles to Eagle Spring, 19 miles to Van Horns Wells, then a waterless 33 miles to Deadman's Hole, 18 miles to Barrel Springs, another 18 miles to Fort Davis. From Fort Davis Station the route proceeded down through Limpia Canyon to Limpia Station, Barrilla Springs, then 34 miles to Leon Springs and 81⁄2 miles on to Camp Stockton. 11 miles east of Camp Stockton the route reached Camp Pleasant then crossed the plain 23 miles to Horsehead Crossing where a ferry carried the coaches across the Pecos River to Horsehead Crossing Station. 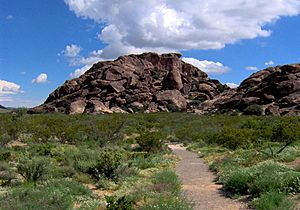 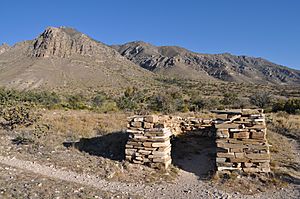 Ruins at The Pinery in Guadalupe Mountains National Park 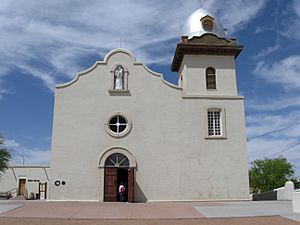 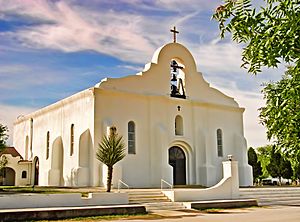 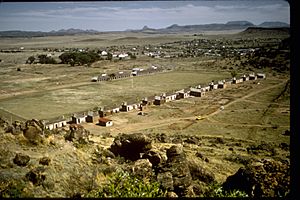 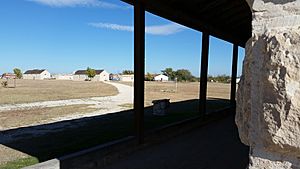 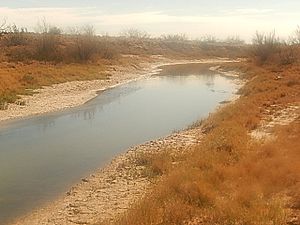 Horsehead Crossing along the Pecos River 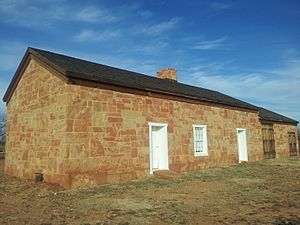 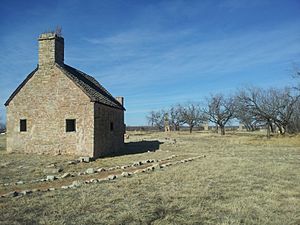 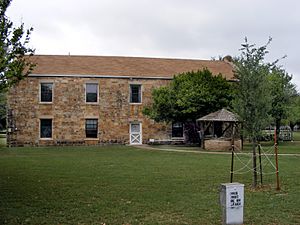 All content from Kiddle encyclopedia articles (including the article images and facts) can be freely used under Attribution-ShareAlike license, unless stated otherwise. Cite this article:
Butterfield Overland Mail in Texas Facts for Kids. Kiddle Encyclopedia.