The Butterfly Pavilion is located in Westminster, Colorado. It opened on July 1, 1995, and was the first stand-alone non-profit insect zoo in the United States. The 30,000-square-foot (2,800 m2) facility is situated on 11 acres (4.5 ha) of land, and contains five main exhibit areas to teach visitors about butterflies and other invertebrates. The main exhibit is an indoor rain forest filled with 1,200 free-flying tropical butterflies. 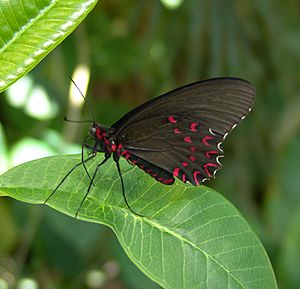 A butterfly at the Pavilion

In 1990, the Rocky Mountain Butterfly Consortium was created with the intention of creating a public butterfly house. The Butterfly Pavilion and Insect Center, the first free-standing butterfly house and invertebrate zoo in the United States, was opened about five years later on July 15, 1995. It joined the Scientific and Cultural Facilities District (SCFD) as a Tier II organization in 1996, and in 1997 launched their first outreach program, the Bugmobile, which serves 20,000 students annually as of 2010. In 1997, the Pavilion was also recognized as the fastest growing cultural attraction in Denver. In 1998, the administrative offices were converted into Water's Edge, a tide pool exhibit.

In 2000, the Adult Education department was started, and in 2002, the Pavilion started offering accredited teacher enrichment courses in partnership with the Colorado School of Mines. 2003 saw the start of construction for a 13,000-square-foot (1,200 m2) addition to the Pavilion, which was completed and opened in 2004. The new space included four classrooms, administrative offices, and a new exhibit space. In June 2007, the outdoor Dee Lidvall Discovery Garden was opened. The garden includes an educational amphitheater, habitat, sensory and xeriscape gardens, two gazebos, a patio, and a water feature with natural filtration. Its main purpose is to help link classroom education and the nature trail.

In 2008, the Pavilion’s curatorial department manager, Mary Ann Hamilton, served as a consultant for the NASA experiment “Butterflies and Spiders in Space.” She provided information for the teachers’ guide and assisted with ground control experiments at the Pavilion and in several classrooms in Colorado.

In February 2017, the group announced plans for a butterfly pavilion at the Gardens on Spring Creek in Fort Collins, with a planned 2019 opening. In May 2017, the group announced plans to move the main Westminster operation to the new Science and Technology Park being developed at Colorado 7 and Sheridan Pkwy. in Broomfield, about ten miles northeast of the main Westminster location.

Wings of the Tropics is a 7,000-square-foot (650 m2) tropical conservatory with over 1,200 butterflies and 200 plant species from tropical rain-forests. On one side of the conservatory, visitors can watch the butterflies emerge from their chrisalides, and twice a day can watch the staff release them into the rain-forest. The Butterfly Pavilion purchases about 500 butterfly chrisalides each week from butterfly farms around the world.

The Nature Trail is a 0.5-mile (0.80 km) just outside the Pavilion along Big Dry Creek. Here visitors can see Colorado's native insects, prairie dogs, and rabbits, and maybe even a heron, hawk, or eagle perched in a tree.

All content from Kiddle encyclopedia articles (including the article images and facts) can be freely used under Attribution-ShareAlike license, unless stated otherwise. Cite this article:
Butterfly Pavilion Facts for Kids. Kiddle Encyclopedia.