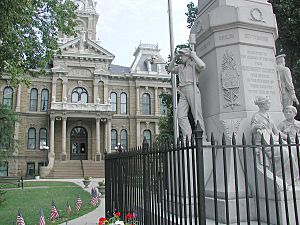 Cambridge is a city in and the county seat of Guernsey County, Ohio, United States. It lies in southeastern Ohio, in the Appalachian Plateau of the Appalachian Mountains. The population was 11,129 at the 2010 census. It is the principal city of the Cambridge Micropolitan Statistical Area and is located adjacent to the intersection of Interstates 70 and 77.

Cambridge is well-known among glass collectors as being the location for the Cambridge Glass, Boyd Glass and Mosser Glass plants. The Cambridge area is also noted for its "S" shaped bridges, dating back to the building of the National Road in 1828.

In 1796, Col. Ebenezar Haase received funds to blaze a road suitable for travel by horse through the Ohio wilderness from a point on the Ohio River opposite Wheeling, Virginia (now Wheeling, West Virginia) to another point opposite Maysville, Kentucky. Where this road, known as Zane's Trace, crossed Wills Creek, a ferry was established in 1798. This was followed by the first bridge authorized by the legislature of the Northwest Territory, built in 1803. The land on which part of Cambridge stands was granted to Zaccheus Biggs and Zaccheus Beatty by the government in 1801. A settlement grew up at the creek crossing. The town of Cambridge was platted there in 1806. Both Cambridge, Maryland and Cambridge, Massachusetts have been speculated by historians as having inspired the naming of the town. Also in 1806, another group of early settlers from the Isle of Guernsey in the English Channel pitched camp in Cambridge, reportedly because the women in the party refused to move on. The county for which Cambridge serves as the county seat was later named in honor of its many settlers from Guernsey. In 1828, the federally built National Road came through Cambridge. The first railroad arrived in 1854.The Cambridge, Ohio area experienced massive flooding in late June 1998.

Cambridge is located along Wills Creek; its tributary Leatherwood Creek flows into Wills Creek in the southern part of the city.

There were 4,651 households of which 30.3% had children under the age of 18 living with them, 33.9% were married couples living together, 16.9% had a female householder with no husband present, 5.2% had a male householder with no wife present, and 44.0% were non-families. 38.2% of all households were made up of individuals and 17% had someone living alone who was 65 years of age or older. The average household size was 2.23 and the average family size was 2.94.

All content from Kiddle encyclopedia articles (including the article images and facts) can be freely used under Attribution-ShareAlike license, unless stated otherwise. Cite this article:
Cambridge, Ohio Facts for Kids. Kiddle Encyclopedia.