Canal Point is a census-designated place (CDP) in Palm Beach County, Florida, United States. Canal Point is located along the eastern shore of Lake Okeechobee, to the northeast of Pahokee and to the northwest of Bryant. The unincorporated community was originally inhabited by the Calusa tribe until almost 400 years ago. Whites began occupying the area in the 1900s decade, establishing an agrarian community. The completion of the West Palm Beach Canal in 1917 allowed crops to be shipped by boat to West Palm Beach and then to other areas of the country, while construction of Conners Highway in 1924 resulted in crops being transported by motor vehicle.

Today, the community still relies heavily on agriculture, especially sugar. The town is very small with very little infrastructure. Canal Point has a small population, with 367 people counted in the 2010 census, down from 525 in the 2000 census.

According to the United States Census Bureau, the CDP has a total area of 1.5 square miles (3.9 km2), all land.

There were 197 households, out of which 34.5% had children under the age of 18 living with them, 45.2% were [married couples living together, 13.7% had a female householder with no husband present, and 35.5% were non-families. 29.4% of all households were made up of individuals, and 9.1% had someone living alone who was 65 years of age or older. The average household size was 2.66 and the average family size was 3.38.

Almost the entirety of Canal Point's populace is involved in agriculture. Most are independent farmers or employees of one of the large local sugar co-operatives, the largest three being the US Sugar Corporation, Osceola Farms, and Fanjul Sugar. The town has an access point to the Lake Okeechobee Scenic Trail. 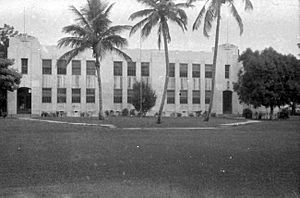 There are no colleges or universities in Canal Point. However, Palm Beach State College has campuses in Belle Glade and Loxahatchee Groves.

The Palm Tran Route 47 connects Canal Point to Pahokee, Belle Glade, and South Bay, as well as to Route 40, which links Belle Glade to Wellington. State Road 15 and US routes 98 and 441 move jointly northeastward through Canal Point, generally parallel to the shore of Lake Okeechobee, with the road locally referred to as E. Main Street. The road is adjoined by the northwest-southeast moving State Road 700, locally known as W. Main Street and Conners Highway, just south of the West Palm Beach Canal. State Road 700 moves southeastward and rejoins State Road 15 and US routes 98 and 441 near Twenty Mile Bend.

All content from Kiddle encyclopedia articles (including the article images and facts) can be freely used under Attribution-ShareAlike license, unless stated otherwise. Cite this article:
Canal Point, Florida Facts for Kids. Kiddle Encyclopedia.