Sugarcane (or sugar cane) is a genus of plants. There are between 6 and 37 types of sugarcane (how many there are depends on the interpretation of what is a grass and what is not). Sugarcane grows in warm and tropical climates. It first grew in Asia, but after the year 700 people started planting it in Africa and southern Europe. Later it spread to the Americas and Australia. It is also grown in Tamil Nadu. Today the biggest producer is Brazil in South America.

Sugarcane stalks grow to between 2 and 6 metres tall. These stalks contain sugar, which is used to sweeten food and drinks. After the sugar has been taken out the remains of the stalks can be burned to generate heat and electricity. It can also be made into paper, cardboard and cutlery. This crop requires high temperature and high rainfall. In areas of low rainfall this crop is cultivated with the help of irrigation. Black soil or alluvial soil is the best for this crop. Sugarcane requires a large amount of water. That is why holding deep soil is required. As this crop absorbs nutrient matter from the soil, compost manure and chemical fertilizers are used. 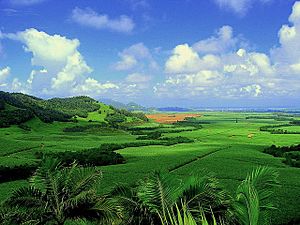 Sugarcane cultivation requires a tropical or subtropical climate, with a minimum of 60 cm (24 in) of annual moisture. It is one of the most efficient photosynthesizers in the plant kingdom. It is a C4 plant, able to convert up to 1% of incident solar energy into biomass. In prime growing regions, such as Mauritius, Dominican Republic, Puerto Rico, Peru, Brazil, Bolivia, Colombia, Guyana, Ecuador, Cuba, El Salvador, Jamaica, Bangladesh, India, Pakistan, Indonesia, Philippines, Malaysia, and Australia, sugarcane crops can produce over 15 kg/m2 of cane. Once a major crop of the southeastern region of the United States, sugarcane cultivation declined there during the late 20th century, and is primarily confined to small plantations in Florida, Louisiana, and southeast Texas in the 21st century. Sugarcane cultivation ceased in Hawaii when the last operating sugar plantation in the state shut down in 2016.

Sugarcane is cultivated in the tropics and subtropics in areas with a plentiful supply of water for a continuous period of more than six to seven months each year, either from natural rainfall or through irrigation. The crop does not tolerate severe frosts. Therefore, most of the world's sugarcane is grown between 22°N and 22°S, and some up to 33°N and 33°S. When sugarcane crops are found outside this range, such as the Natal region of South Africa, it is normally due to anomalous climatic conditions in the region, such as warm ocean currents that sweep down the coast. In terms of altitude, sugarcane crops are found up to 1,600 metres or 5,200 feet close to the equator in countries such as Colombia, Ecuador, and Peru.

Sugarcane can be grown on many soils ranging from highly fertile, well-drained Mollisols, through heavy cracking Vertisols, infertile acid Oxisols, peaty Histosols, to rocky Andisols. Both plentiful sunshine and water supplies increase cane production. This has made desert countries with good irrigation facilities such as Egypt some of the highest-yielding sugarcane-cultivating regions.

Although some sugarcanes produce seeds, modern stem cutting has become the most common reproduction method. Each cutting must contain at least one bud, and the cuttings are sometimes hand-planted. In more technologically advanced countries like the United States and Australia, billet planting is common. Billets (stalks or stalk sections) harvested by a mechanical harvester are planted by a machine that opens and recloses the ground. Once planted, a stand can be harvested several times; after each harvest, the cane sends up new stalks, called ratoons. Successive harvests give decreasing yields, eventually justifying replanting. Two to 10 harvests are usually made depending on the type of culture. In a country with a mechanical agriculture looking for a high production of large fields, like in North America, sugar canes are replanted after two or three harvests to avoid a lowering in yields. In countries with a more traditional type of agriculture with smaller fields and hand harvesting, like in the French island la Réunion, sugar cane is often harvested up to 10 years before replanting.

Sugarcane is harvested by hand and mechanically. Hand harvesting accounts for more than half of production, and is dominant in the developing world. In hand harvesting, the field is first set on fire. The fire burns dry leaves, and chases away or kills venomous snakes, without harming the stalks and roots. Harvesters then cut the cane just above ground-level using cane knives or machetes. A skilled harvester can cut 500 kg (1,100 lb) of sugarcane per hour.

Mechanical harvesting uses a combine, or sugarcane harvester. The Austoft 7000 series, the original modern harvester design, has now been copied by other companies, including Cameco / John Deere. The machine cuts the cane at the base of the stalk, strips the leaves, chops the cane into consistent lengths and deposits it into a transporter following alongside. The harvester then blows the trash back onto the field. Such machines can harvest 100 long tons (100 t) each hour; however, harvested cane must be rapidly processed. Once cut, sugarcane begins to lose its sugar content, and damage to the cane during mechanical harvesting accelerates this decline. This decline is offset because a modern chopper harvester can complete the harvest faster and more efficiently than hand cutting and loading. Austoft also developed a series of hydraulic high-lift infield transporters to work alongside their harvesters to allow even more rapid transfer of cane to, for example, the nearest railway siding. This mechanical harvesting does not require the field to be set on fire; the residue left in the field by the machine consists of sugar cane tops and dead leaves, which serve as mulch for the next planting.

Sugarcane plantations in Brazil, the largest producer in the world

All content from Kiddle encyclopedia articles (including the article images and facts) can be freely used under Attribution-ShareAlike license, unless stated otherwise. Cite this article:
Sugarcane Facts for Kids. Kiddle Encyclopedia.