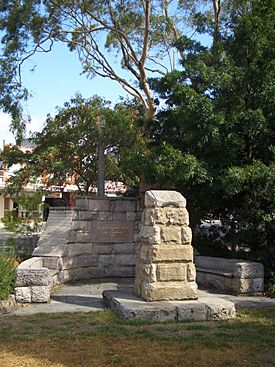 Caringbah is a suburb in southern Sydney, in the state of New South Wales, Australia. Caringbah is 24 kilometres (15 mi) south of the Sydney central business district in the local government area of Sutherland Shire.

Caringbah is an Aboriginal word for a pademelon wallaby. The suburb was originally called Highfield, but it is unclear whether this was a position description or whether it was named after an early resident. Caringbah was used from 1911, after the steam trams began operating between Cronulla and Sutherland.

Thomas Holt (1811–88) owned most of the land that stretched from Sutherland to Cronulla in the 1860s. Most of the area around Miranda and Caringbah was used for market gardening from the 1880s. Caringbah was still used for orchards and farming until after World War II. The railway line to Cronulla opened in 1939.

Caringbah is a central suburb of the Sutherland Shire, considering some of the main roads intersect here. President Avenue and the Kingsway both run from Sutherland via Miranda in the west, to the popular beachside suburb of Cronulla in the east. Taren Point Road leads north to the Captain Cook Bridge, St George area and further north to the Sydney CBD.

Caringbah railway station is on the Cronulla branch of the Eastern Suburbs & Illawarra Line T4 on the Sydney Trains network.

According to the 2016 census of Population, there were 11,658 people in Caringbah.

All content from Kiddle encyclopedia articles (including the article images and facts) can be freely used under Attribution-ShareAlike license, unless stated otherwise. Cite this article:
Caringbah Facts for Kids. Kiddle Encyclopedia.