Carpinus betulus, the European or common hornbeam, is a species of tree in the birch family Betulaceae, native to Western Asia and central, eastern, and southern Europe, including southern England. It requires a warm climate for good growth, and occurs only at elevations up to 1,000 metres (3,281 ft). It grows in mixed stands with oak, and in some areas beech, and is also a common tree in scree forests. Hornbeam was also known as 'Yoke Elm'. 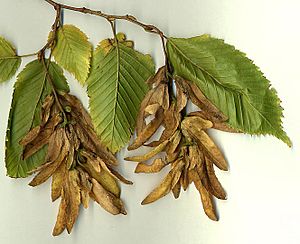 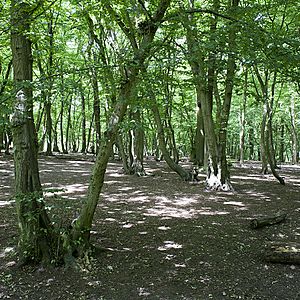 It is a deciduous small to medium-size tree reaching heights of 15–25 metres (49–82 ft), rarely 30 m (98 ft), and often has a fluted and crooked trunk. The bark is smooth and greenish-grey, even in old trees. The buds, unlike those of the beech, are 10 mm (0.39 in) long at the most, and pressed close to the twig. The leaves are alternate, 4–9 cm (1.6–3.5 in) long, with prominent veins giving a distinctive corrugated texture, and a serrated margin. It is monoecious, and the wind-pollinated male and female catkins appear in early summer after the leaves. The fruit is a small 7–8 mm (0.28–0.31 in) long nut, partially surrounded by a three-pointed leafy involucre 3–4 cm (1.2–1.6 in) long; it matures in autumn.

The wood is heavy and hard, and is used for tools and building constructions. It also burns hot and slowly, making it very suitable for firewood. This was the reason for lopping and hence indirectly the saving of Epping Forest, where the hornbeam was a favoured pollarding tree.

Hornbeam was frequently coppiced and pollarded in the past in England. It is still infrequently managed using these traditional methods, but mainly for non-commercial conservation purposes. As a woodland tree traditionally managed in this way, it is particularly frequent in the ancient woodlands of south Essex, Hertfordshire and north Kent where it typically occupies more than half of most ancient woods and wood pastures.

See also: List of Lepidoptera that feed on Carpinus

The leaves provide food for some animals, including Lepidoptera such as the case-bearer moth Coleophora anatipennella.

There are a number of notable forests where C. betulus is a dominant tree species, among which are:

In England, trees appear to prefer soils with a pH from 3.6 to 4.6 but tolerate up to 7.6. They are found on soils with moderate clay content and avoid soils with particularly high or low clay content. Carpinus betulus likes full sun or partial shade, moderate soil fertility and moisture. It has a shallow, wide-spreading root system and is marked by the production of stump sprouts when cut back. Because it stands up well to cutting back and has dense foliage, it has been much used in landscape gardening, mainly as tall hedges and for topiary.

The seeds often do not germinate till the spring of the second year after sowing. The hornbeam is a prolific seeder and is marked by vigorous natural regeneration.

Carpinus betulus is widely cultivated as an ornamental tree, for planting in gardens and parks throughout north west Europe. There are several cultivars, notably:

Both the species and the cultivar C. betulus 'Fastigiata' have gained the Royal Horticultural Society's Award of Garden Merit.

All content from Kiddle encyclopedia articles (including the article images and facts) can be freely used under Attribution-ShareAlike license, unless stated otherwise. Cite this article:
Carpinus betulus Facts for Kids. Kiddle Encyclopedia.