Carrizozo is a town in Lincoln County, New Mexico, United States. It is the county seat, with a population of 996 at the 2010 census. Founded in 1899, the town provided the main railroad access for Lincoln County, and the town experienced significant population growth in the early decades of the 1900s. However, with declining relevance of the railroad, the population of the town has gradually declined. The town is located at the intersection of U.S. Routes 54 and 380.

The name of the town is derived from the Spanish vernacular for reed grass (Carrizo), which grew significantly in the area and provided excellent feed for ranch cattle. The additional 'zo' at the end of the town name was added to indicate abundance of Carrizo grass. The town is now often referred to as 'Zozo.

Prior to 1899, the area was primarily a few ranches and a stagecoach crossing with limited permanent settlement. Lawrence Murphy, a merchant active in the Lincoln County War (1878), owned a major ranch in the area. The location of Carrizozo was selected as the site for a station on the El Paso and Northeastern Railway (EP&NE) main line in 1899. Carrizozo was chosen over the nearby booming mine town of White Oaks, New Mexico, resulting in large-scale migration from White Oaks to Carrizozo.

The railroad brought businesses, growing populations, and increased importance to the town of Carrizozo. As a result, a county referendum in 1909 moved the county seat of Lincoln County from the town of Lincoln to Carrizozo. This decision resulted in a four-year legal battle that was eventually resolved in favor of Carrizozo by the United States Supreme Court in the case of Gray v. Taylor. The result was a boom period where railroad access and political importance combined to lead to significant population growth in Carrizozo. The population reached around 2,000 by 1920.

During this time, Albert Bacon Fall, first Senator of New Mexico and later Secretary of the Interior, owned the Three Rivers Ranch just south of Carrizozo but had to sell it to settle legal debts as a result of his involvement in the Teapot Dome scandal (1922-1923). During the same time, journalist Quentin Reynolds visited the town and wrote a piece on it for Collier's Weekly. Later, he wrote in The Wounded Don't Cry that "I used to agree with Bugs that once you left New York, you were strictly on the horse and buggy circuit. But of late years I’ve had to modify that. Since then I’ve discovered New Orleans, San Francisco and a little place called Carrizozo, New Mexico, where I want to go when I die. I want to go there and gang around the drug store and sneak behind the prescription counter with Art Rolland and have a nip of what he calls Old Granddaddy then type out his prescriptions for him."

Carrizozo is about 50 miles from Trinity Site, where the first nuclear bomb was detonated on July 16, 1945. Residents reported tremors like an earthquake and, as the first major downwind settlement, the town received a significant part of the remnants of the mushroom cloud (resulting in some radioactive contamination of the area, which faded quickly and does not persist today).

With the rise of the automobile, Carrizozo's proximity to the railroad became less important starting in the 1950s, and the last passenger train passed through in 1968. The result was a decrease in economic opportunity in Carrizozo, and the population fell back to about 1,200 people for much of the end of the 20th century. Recently, the town has seen increasing focus on tourism, and cherry cider produced in the town is known nationally. 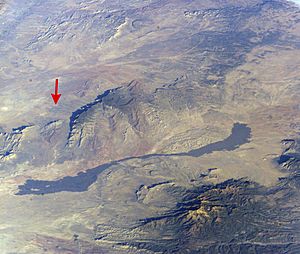 The Carrizozo Malpais is the long dark streak across the bottom half of the image. The red arrowhead marks the location of Trinity site. Credit: NASA Astronaut photograph ISS008-E-5604, taken at an altitude of 198 miles.

Carrizozo is located at the northern point of the Tularosa Basin which extends southward to the New Mexico-Texas border. The town itself is located in a flat area known prior to the founding of the town as the Corrizo flats, with typical Chihuahua desert scrub.

To the west of the town is the Carrizozo Malpais, a 40 mile long lava flow that is about 1,500 years old and accessible through the Valley of Fires Recreation Area To the northeast is the Carrizo mountain, a 9,000-foot peak, and to the southeast are the Sacramento Mountains.

Carrizozo is located at the intersection of U.S. Routes 54 and 380. For general aviation, the town is served by Carrizozo Municipal Airport. 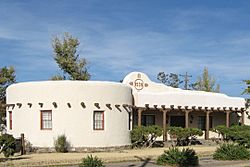 All content from Kiddle encyclopedia articles (including the article images and facts) can be freely used under Attribution-ShareAlike license, unless stated otherwise. Cite this article:
Carrizozo, New Mexico Facts for Kids. Kiddle Encyclopedia.