The Cascade–Siskiyou National Monument is a United States national monument that protects 114,000 acres (46,134 ha) of forest and grasslands at the junction of the Cascade Range and the Siskiyou Mountains in Southwestern Oregon and Northwestern California, United States. The monument is managed by the Bureau of Land Management as part of the National Landscape Conservation System. It was established in a presidential proclamation by President Bill Clinton on June 9, 2000 and expanded by President Barack Obama on January 12, 2017.

Native Americans are known from archaeological excavations to have inhabited the region for thousands of years. Nearly 100 dwelling and root-gathering sites belonging to the Modoc, Klamath, and Shasta tribes have been uncovered to date. By the 1880s, their lands were taken by white settlers, whose mining cabins still dot the region. Natural features in the monument include Pilot Rock, a volcanic neck or interior of an extinct volcano, similarly formed as Devils Tower in Wyoming and the Soda Mountain Wilderness. 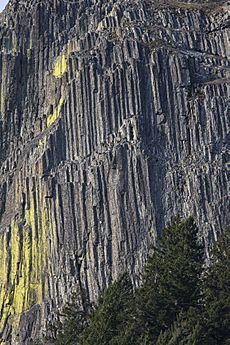 The Pacific Crest Trail runs through the monument area. There is a fire lookout tower on the top of Soda Mountain built in 1962 to replace the original 1933 structure. Although the top of the mountain is also the site of dozens of television and radio broadcast and relay dishes, the view from the fire lookout of the surrounding mountains is unobstructed. From the lookout, one can see Mount Shasta, Mount Ashland, Mount McLoughlin, as well as on clear days, the rim of Crater Lake.

The Cascade–Siskiyou National Monument land use plan has been the source of local and national controversy over multi-use planning for wilderness and roadless areas. The plan currently strives for a balance between managing rare natural habitat, recreational activities, and agricultural activities including cattle grazing and timber. Numerous private land inholdings remain within the boundaries of the Monument. The Southern Oregon Land Conservancy holds a conservation easement on a 1,312-acre (531 ha) private property near Siskiyou Summit.

The monument expansion is opposed by the Boards of Commissioners of Jackson County and Klamath County (both in Oregon); and the Siskiyou County Board of Supervisors (in California). A group of local people calling themselves the "No Monument Tribe" opposes the monument in its entirety, both the initial establishment and the expansion.

Federal judges in Washington, DC and Oregon issued conflicting decisions in 2019 over the legality of the expansion into O&C Lands. 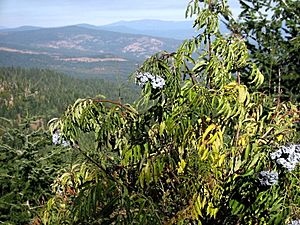 Blue elderberry in the monument

The Cascade–Siskiyou National Monument is the first U.S. national monument set aside solely for the preservation of biodiversity. It has one of the most diverse ecosystems found in the Cascade Range. Two hundred species of birds are known to exist in the monument including some threatened and endangered species. Amphibians found in the National Monument include the rough-skinned newt.

Cascade–Siskiyou National Monument is noted for its significant botanical diversity. The range of elevations and diversity of habitat types provides for a spectacular flora that includes many endemics to the immediate Siskiyou crest area, such as Green's mariposa lily (Calochortus greenei). The federally endangered Gentner's fritillary (Fritillaria gentneri) is known to occur in the monument.

All content from Kiddle encyclopedia articles (including the article images and facts) can be freely used under Attribution-ShareAlike license, unless stated otherwise. Cite this article:
Cascade–Siskiyou National Monument Facts for Kids. Kiddle Encyclopedia.