Castro is a city and commune on Chiloé Island in Chile. Castro is the capital of the Chiloé Province in the Los Lagos Region. The city is located on Estero de Castro on the eastern coast of central Chiloé Island. This position provides Castro with a good access to the eastern islands of Chiloé Archipelago as well as to the open ocean through Cucao and Huillinco to the west.

Castro is Chile's third oldest city in continuous existence. Rodrigo de Quiroga as the temporary governor of Chile in 1567 launched a campaign led by his son in-law Captain Martín Ruiz de Gamboa to conquer Chiloé Island, establishing the city of Castro there, and subjugating its inhabitants, the Cuncos. From its founding on 12 February 1576 until 1767 Castro was the administrative centre of Chiloé Island. In 1594 Castro had 8,000 inhabitants most of whom were farmers. Up to the middle of the 17th century the town was looted by Dutch pirates several times.

In 1767, during the time of the Bourbon Reforms that sought to modernize the Spanish Empire, Chiloé was separated from the General Captaincy of Chile to which it had previously belonged and made a direct subject of the Viceroyalty of Peru. To ease the communications with Lima the capital of the archipelago was moved from Castro to Ancud in the same year. Even after the incorporation of Chiloé of into the Republic of Chile, Ancud remained the capital of the archipelago. Castro was destroyed by an earthquake in 1837 and had only 1,243 inhabitants in 1907. After the inauguration of the railway line to Ancud in 1912 the town developed better. Many buildings, including the railway station, town hall and many of the wooden palafitos houses, were destroyed or damaged by the earthquake and tsunami of 1960. In 1960, Castro had 7,000 inhabitants. Only in 1982 did Castro regain its role as the capital of the Chiloé Archipelago.

As a commune, Castro is a third-level administrative division of Chile administered by a municipal council, headed by an alcalde who is directly elected every four years. 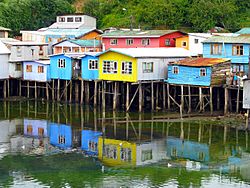 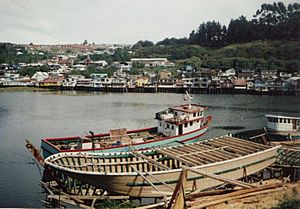 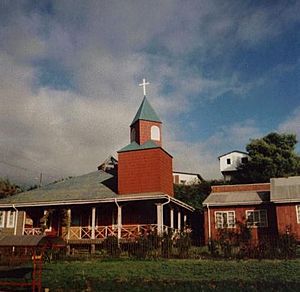 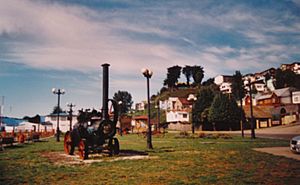 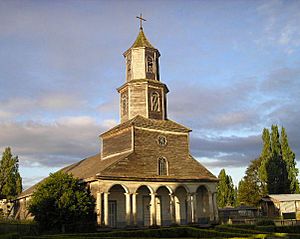 During colonial times, Castro was the site of a small fort system made up of Fuerte de Castro, Batería marítima de Castro and Fortín de Tauco. The last fortification is not located in Castro proper but a few kilometers south along Estero de Castro. Only the remnats of Fortín de Tauco can be found at present, there are no known vestiges of the two fortifications that were located in what is now the city of Castro.

All content from Kiddle encyclopedia articles (including the article images and facts) can be freely used under Attribution-ShareAlike license, unless stated otherwise. Cite this article:
Castro Facts for Kids. Kiddle Encyclopedia.