Kids Encyclopedia Facts
For the bell attached to the collar of a cat, see cat bell.

Cat Bells is a fell in the English Lake District in the county of Cumbria. It has a height of 451 metres (1,480 ft) and is one of the most popular fells in the area. It is situated on the western shore of Derwentwater within 3 miles (5 km) of the busy tourist town of Keswick. Its distinctive shape catches the attention of many visitors to the Lakes who feel compelled to climb to the summit after seeing it from the viewpoint of Friars' Crag on the opposite side of Derwentwater. The Lake District writer and walker Alfred Wainwright acknowledges the popularity of Cat Bells among fellwalkers of all abilities by saying:

"It is one of the great favourites, a family fell where grandmothers and infants can climb the heights together, a place beloved. Its popularity is well deserved: its shapely topknott attracts the eye offering a steep but obviously simple scramble."

The fell's unusual name may well have come from a distortion of "Cat Bields" meaning shelter of the wild cat, although this is not certain. The fell's name is sometimes written as Catbells.

Cat Bells is the last fell on the ridge separating Derwentwater from the Newlands valley. It rises due south from Hawse End, reaching the summit in two distinct steps. The lower top is named Skelgill Bank. Beyond the summit of Cat Bells is the steep sided depression of Hause Gate, before the ridge broadens and twists south westward to Maiden Moor.

The Cat Bells ridge is an example of the Buttermere Formation, an olistostrome of disrupted, sheared and folded mudstone, siltstone and sandstone.

Nearly all ascents of Cat Bells start from Hawse End at the foot of the northern ridge; there is car parking here but the spaces soon get taken on busy summer days. Ascents can also be made from Grange and from Newlands. Hawse End is also served by the Derwentwater Motor Launch and this enables visitors to Keswick to combine a sail on the lake with an ascent of the fell. Many walkers who reach the top of Cat Bells return to their starting point after admiring the view: however, strong walkers can continue along the ridge to take in the fells of Maiden Moor, High Spy, Dale Head, Hindscarth and Robinson to give a horseshoe walk which ends in the Newlands valley close to Hawse End.

The summit is all rock with many loose stones lying amid the small outcrops. The view from the top of Cat Bells gives a fine panorama which is dominated by the aerial view of Derwentwater. Bassenthwaite Lake, the Newlands Valley, Skiddaw and Keswick all show well to the north, while the view south has a fine vista of Borrowdale.

A 360 degree view from the summit of Cat Bells. The view North of the summit (middle of the image) takes in Skiddaw, Blencathra and Keswick on the edge of Derwentwater. 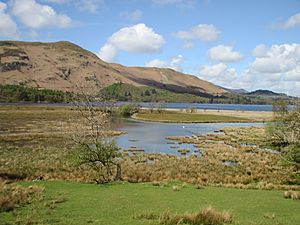 Although Cat Bells is renowned as a "family fell" it does have some dangers especially from the disused lead mines on its slopes. The Yewthwaite mine, which is on the western side of the fell has extensive spoil heaps and shafts. Many of the shafts were previously open and dangerous but most have now been blocked off. The Brandlehow and Old Brandley Mine worked a lode for lead ore on the Derwentwater (eastern) side of the fell. All three mines ceased production in the 1890s. 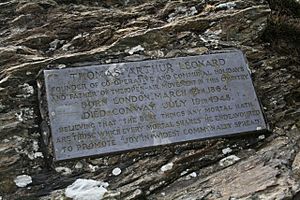 Memorial plaque to T. A. Leonard at Cat Bells

On the lower slopes of the fell is a memorial stone to Thomas Arthur Leonard (1864-1948), a pioneer of outdoor holidays for working people who founded the Co-operative Holidays Association and the Holiday Fellowship.

All content from Kiddle encyclopedia articles (including the article images and facts) can be freely used under Attribution-ShareAlike license, unless stated otherwise. Cite this article:
Cat Bells Facts for Kids. Kiddle Encyclopedia.