Cathar castles (Châteaux cathares in French) is a term used by the French tourist industry. It is used for castles in the Languedoc-Roussillon, usually built by the enemies of the Cathars during the Albigensian Crusade.

The Cathars built fortified homesteads, but not castles. The legend of Cathar architects and builders is no more than a myth. The cathar church did not build anything. For this reason, the only ones which can claim the description "Cathar" are the small castles, often totally unknown to the public. Their unspectacular ruins are often far-away from tourist routes.

Because Raimond II was unable to recapture Carcassone in 1240, the city walls were strengthened by the French King. He also destroyed small castra in the Corbières region and built citadels to protect the border with the kingdom of Aragon.

The abandonment of the citadels

In 1659, Louis XIV and the Philip IV of Spain signed the Treaty of the Pyrenees. The French king also married the Infanta Marie Therese. The treaty changed the borders. It gave Rousillon to France and moved the frontier south to the crest of the Pyrenees, where it is now. The fortresses therefore lost their importance. Some maintained a garrison for a while, a few until the French Revolution, but they slowly fell into decay, often becoming sherpherds' shelters or bandits hideouts. 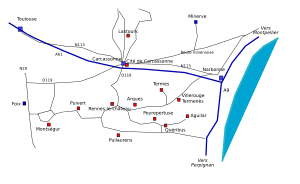 All content from Kiddle encyclopedia articles (including the article images and facts) can be freely used under Attribution-ShareAlike license, unless stated otherwise. Cite this article:
Cathar castles Facts for Kids. Kiddle Encyclopedia.