Ceanothus greggii, known by the common name desert ceanothus, is a species of flowering shrub in the buckthorn family, Rhamnaceae. It is native to the Southwestern United States (Arizona, California, New Mexico, Texas, and Utah) and northern Mexico, where it grows primarily in desert scrub, sagebrush, chaparral, and other dry habitats such as inland mountain slopes, at elevations of 1,000 m (3,300 ft) to 2,300 m (7,500 ft).

It was named by Asa Gray of Harvard University in 1853 in honor of its collector, Josiah Gregg, who found the plant in 1847 at the site of the Battle of Buena Vista in the Mexican state of Coahuila during the Mexican–American War. 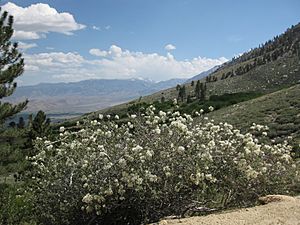 Ceanothus greggii is a many-branched shrub that grows erect to nearly 2 m (6.6 ft) in maximum height. Its woody parts are gray in color and somewhat woolly. Branches are opposite and rigid. The evergreen leaves are oppositely arranged, 2–9 mm long, and variable in shape, with a prominent midvein. They may be toothed or smooth along the edges, and are indeed usually somewhat cupped (see top image).

The inflorescence is a small (less than 2 cm long) cluster of many white flowers on short lateral branches. The flowers bloom in spring. Blooms are considered highly fragrant. The fruit is a horned capsule a few millimeters wide which bursts explosively to expel the three seeds inside, which require thermal scarification from wildfire before they can germinate.

C. greggii is eagerly browsed by livestock and wild ungulates such as mule deer and desert bighorn sheep.

Distinct varieties of C. greggii include:

All content from Kiddle encyclopedia articles (including the article images and facts) can be freely used under Attribution-ShareAlike license, unless stated otherwise. Cite this article:
Ceanothus greggii Facts for Kids. Kiddle Encyclopedia.