Cedar Grove is a mixed-use locality in the City of Logan, Queensland, Australia. In the 2016 census Cedar Grove had a population of 2,041 people. 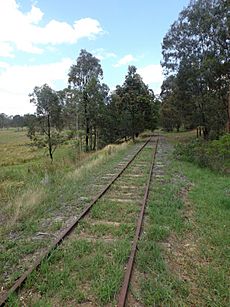 When the railway line to Beaudesert was built in 1888, the station in the area was called Cedar Pocket. Cedar Grove State School opened in 1923 and closed in 1965. Formerly in the Shire of Beaudesert, Cedar Grove became part of Logan City following the local government amalgamations in March 2008.

All content from Kiddle encyclopedia articles (including the article images and facts) can be freely used under Attribution-ShareAlike license, unless stated otherwise. Cite this article:
Cedar Grove, Queensland Facts for Kids. Kiddle Encyclopedia.