Cedar Lake is an artificial lake in the San Bernardino Mountains of California that has appeared in dozens of Western films. It is the centerpiece of Cedar Lake Camp, a private retreat center owned and operated by Cedar Lake Camp, Inc., a non profit public benefit corporation.

The lake is formed by a dam across a minor tributary of Metcalf Creek. The creek feeds Metcalf Bay, an arm of Big Bear Lake, whose waters reach the Pacific Ocean by way of Bear Creek and the Santa Ana River. 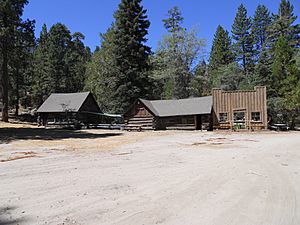 Amish log cabins. About 125 years old. Procured by the movie industry and moved to the lake

In 1913, the Talmadge brothers purchased the property where the lake, dam, and camp are now situated. They used the land to graze cattle, then sold it in 1922 to the Bartlett brothers, who built the dam in 1928. They in turn sold it in 1937 to family member Guy Bartlett, who charged visitors 25¢ for admission to the property. In January 1955, the First Congregational Church of Los Angeles bought 110 acres (45 ha). The church later increased its holdings to 270 acres (110 ha).

The lake's scenery and proximity to Hollywood made it a popular filming location. It appeared in more than forty films, including:

It also appeared in six television series, including: 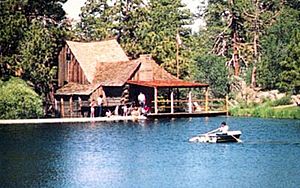 Cedar Lake and Sawmill. The dam is at the waterline to the left.

The old mill house and water wheel can be seen in the Bonanza episode "Thornton's Account".

There are two other Cedar Lakes in California, both in Siskiyou County:

All content from Kiddle encyclopedia articles (including the article images and facts) can be freely used under Attribution-ShareAlike license, unless stated otherwise. Cite this article:
Cedar Lake (California) Facts for Kids. Kiddle Encyclopedia.