The Cathedral of Cefalù (Italian: Duomo di Cefalù) is a Roman Catholic basilica in Cefalù, Sicily. It is one of nine structures included in the UNESCO World Heritage Site known as Arab-Norman Palermo and the Cathedral Churches of Cefalù and Monreale.

The cathedral was built in 1131 in the Norman architectural style. The island of Sicily had been conquered by the Normans in 1091. According to tradition, the king of Sicily, Roger II, made a vow to build a cathedral, after he escaped from a storm to land on the city's beach. The building has a fortress-like character and dominates the skyline of the surrounding medieval town. It made a powerful statement of the Norman presence. 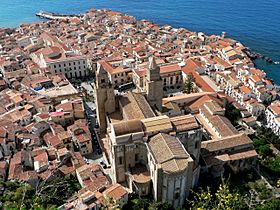 Cefalù Cathedral within the town

The cathedral was built in an area, where peopke had lived for a long time. Today, a Roman road and aearly Christian mosaic show this. Construction began in 1131, the apse mosaics were begun in 1145, and the sarcophagi that Roger II provided for his tomb and that of his wife were put in place the same year. After 1172 the church suffered a period of decline. In 1215 Frederick II of Hohenstaufen moved the two sarcophagi to the Cathedral of Palermo. Construction of the cathedral was resumed soon after, the façade ws completed in 1240. The Cathedral was consecrated in 1267 by Rodolphe de Chevriêres, Bishop of Albano.

In 1472 a portico, by Ambrogio da Como, was added between the two towers of the facade.

All content from Kiddle encyclopedia articles (including the article images and facts) can be freely used under Attribution-ShareAlike license, unless stated otherwise. Cite this article:
Cefalù Cathedral Facts for Kids. Kiddle Encyclopedia.