Chapel Hill is a suburb in the City of Brisbane, Queensland, Australia. In the 2016 census Chapel Hill had a population of 10,113 people.

The median age of the Chapel Hill population was 41 years of age, 3 years above the Australian median.

Chapel Hill has a highly educated population with over 49% of residents holding a bachelor's degree or above, compared to the Australian average of 22.0%. 58.6% of Chapel Hill working people are employed in professional or managerial occupations, compared to Queensland average of 35.2%

Moggill Road is the major road through Chapel Hill connecting it to the suburbs of Indooroopilly to the east, and Kenmore to the west. The Western Freeway allows quick access to the suburb from around Brisbane and with the opening of the Legacy Way tunnel, the traffic flow is significantly better at peak times and the commute to the airport takes approx 25 mins, when travelling via both Legacy Way and Airport Link tunnels. There are also the four bus routes, the 425, the 426, the 427 and the 428 that service a large portion of Chapel Hill. The 425 travels to Indooroopilly shopping centre and Toowong Village, continuing into the Brisbane CBD. The 426 is an express bus that services only Chapel Hill, and then travels direct to the CBD via the Western Freeway (M5), Legacy Way Tunnel, and onto the Inner Northern Busway. The morning P426 commute is less than 25 minutes from Chapel Hill to the Brisbane CBD, even in peak hour, due to this routing.

Chapel Hill is close to the University of Queensland, with direct bus routes to and from the university.

The only church in Chapel Hill is Chapel Hill Uniting Church located on the hill on the corner of Moggill Road and Chapel Hill Road. The church hall was originally a Primitive Methodist chapel built in 1875, and the suburb takes its name from this chapel on the hill. There is a small cemetery beside the church. The Chapel Hill State School hall is sometimes used for numerous events such as local, state and federal elections and weekly church services.

Many locals take advantage of the hiking and walking trails in Chapel Hill which climb to the summit of Mount Coot-tha and overlooks Brisbane. Native fauna and flora are often seen on these paths. Some of these trails also attract mountain bikers on the weekends. A popular spot for locals is the Green Hill Reservoir off Chapel Hill Road which includes an offleash area for dogs and boasts amazing views of the city so it is usually crowded during events hosting fireworks, such as Brisbane Riverfire. Running and exercise groups often also use this area in the early hours. There are good recently created bike paths in the suburb which link up to roads and bikeways that ultimately stretch through the western suburbs to the CBD. 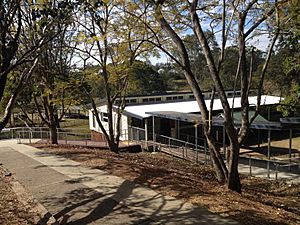 There are no private schools in Chapel Hill.

All content from Kiddle encyclopedia articles (including the article images and facts) can be freely used under Attribution-ShareAlike license, unless stated otherwise. Cite this article:
Chapel Hill, Queensland Facts for Kids. Kiddle Encyclopedia.