Charles Gerard Conn was born in Phelps, New York, on January 29, 1844. In 1850, he accompanied his family to Three Rivers, Michigan, and in the following year to Elkhart, Indiana. Little is known about his early life, other than that he learned to play the cornet. With the outbreak of the American Civil War he enlisted in the United States Army on May 18, 1861 at the age of seventeen, despite his parents' protests. On June 14, 1861, he became a private in Company B, 15th Regiment Indiana Infantry, and shortly afterwards was assigned to a regimental band. When his enlistment expired he returned to Elkhart, but re-enlisted on December 12, 1863, at Niles, Michigan, in Company G, 1st Michigan Sharpshooters. At the age of nineteen on August 8, 1863, he was elevated to the rank of captain. During the Assault on Petersburg on July 30, 1864, Conn was wounded and taken prisoner. In spite of two imaginative and valiant attempts to escape, he was recaptured and spent the remainder of the war in captivity. At the end of hostilities, he was released from Columbia, South Carolina prison camp, and was honorably discharged on July 28, 1865. He was one of only six Union soldiers to be retroactively awarded the Silver Citation Star on the Civil War Campaign Medal for gallantry in action.

After the war he engaged in the grocery and bakery business. In 1871, while serving as a band leader in Buchanan, Michigan, Conn badly injured his hand while working at the local zinc horse collar-pad factory. The accident forced Conn to switch from violin to cornet.

In 1877, Conn and his wife, Catherine, relocated to Elkhart, Indiana, where Conn worked various jobs for two years. During this time, Conn sold health care products under the tradename "Konn's Kurative Kream", and invented parts for sewing machines. He also plated and engraved silverware, and manufactured rubber stamps. Drawing from the skills learned at his previous jobs, he invented a cornet mouthpiece with a rubber rim, which began his career in the manufacture of band instruments Conn was an important innovator in the development of modern wind instruments, and established the C.G. Conn Company, a major instrument manufacturer, in Elkhart.

Charles Conn was elected Mayor of Elkhart in 1880. In 1884 Conn organized the 1st Regiment of Artillery in the Indiana Legion and became its first Colonel, a military title which stayed with him throughout the remainder of his life. He was also the first commander of the Elkhart Commandery of the Knights Templar. Colonel Conn also served as Lieutenant Colonel of the 2nd Regiment of Uniform Rank, Knights of Pythias, and was re-elected many times as Commander of the local G.A.R. post.

Conn served as mayor of Elkhart from 1880 until 1883, and as member of the Indiana state House of Representatives in 1889. He established the "Elkhart Daily Truth" in 1889, which is still operating as The Elkhart Truth. 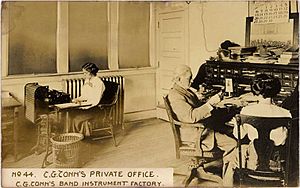 Conn was elected as a Democrat to the Fifty-third Congress (4 March 1893 - 3 March 1895), but he was not a candidate for renomination in 1894. Conn bought the newly established Washington Times in 1894, during his congressional term.

After his term in Congress, Conn resumed the manufacture of band instruments at Elkhart, Indiana. In 1916 he retired and moved to Los Angeles, California. Conn authored books in his retirement, including The Sixth Sense, Prayer: Brain Cell Reformation (1916), For the Good of the World. Finding the Real God (1919), and The Wonder Book: How to Achieve Success (1923). Conn died 5 January 1931 in Los Angeles, and was interred in Grace Lawn Cemetery, Elkhart, Indiana.

All content from Kiddle encyclopedia articles (including the article images and facts) can be freely used under Attribution-ShareAlike license, unless stated otherwise. Cite this article:
Charles G. Conn Facts for Kids. Kiddle Encyclopedia.