Three Rivers is a city in St. Joseph County in southwestern Michigan in the United States. The population was 7,811 at the 2010 census.

The city is the home of St. Gregory's Abbey, a Benedictine monastery of the Episcopal Church, which was established in 1946. 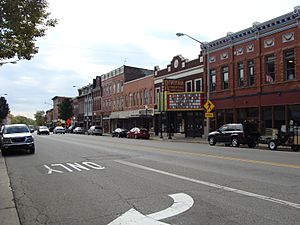 Public education for Three Rivers and the surrounding area is provided by the Three Rivers Community Schools.

All content from Kiddle encyclopedia articles (including the article images and facts) can be freely used under Attribution-ShareAlike license, unless stated otherwise. Cite this article:
Three Rivers, Michigan Facts for Kids. Kiddle Encyclopedia.