Kids Encyclopedia Facts
This page is about the city of Chaska, Minnesota. For other uses of the word Chaska, see Chaska (disambiguation).

Chaska is a city in Carver County, Minnesota, United States. The population was 23,770 at the 2010 census. It is the county seat of Carver County, which is part of the Minneapolis-St. Paul-Bloomington, MN-WI Metropolitan Statistical Area. 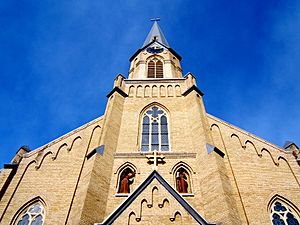 Chaska's history reflects the influence of the Native American culture. The first inhabitants are believed to be the Mound Builders, whose ancient communities are marked by mounds in City Square. Later, the Dakota (commonly known as the Sioux) were the primary nation in this region known as the Big Woods. Although the Indian mounds located in Chaska City Square indicate the immediate area was inhabited years before 1769, that's the year Chaska's recorded history began.

In 1776, Jonathan Carver explored the lands along the Minnesota River and chronicled his journeys. French Canadian fur traders traveled the waterways, trading with the Dakota in the early 19th century. During this time, Jean-Baptiste Faribault established a trading post in Chaska.

In 1851, the Treaty of Traverse des Sioux officially opened Little Rapids, as Chaska was then known, to settlement. Soon after, speculators moved into the new territory. Among the earliest was Thomas Andrew Holmes who, in August 1851, claimed a 20-acre (81,000 m2) clearing as the Chaska townsite.

The name "Chaska" is derived from a Dakota word often given as a name to the first born male child. Records show that David L. Fuller purchased the "Shaska" townsite from Holmes in 1852. In 1857, the townsite was platted by the Shaska Company. In the same year, construction began on the original Carver County Courthouse located where the post office and KleinBank now stand in downtown Chaska. Chaska was incorporated as a village in 1871 and, by special legislative charter, as a city in 1891.

An abundance of high quality clay led to the start of brick making in 1857. By the 1880s, as a result of the clay resources, Chaska was a thriving brick manufacturing center. Bricks were shipped by boat to Saint Paul and, although the city grew as a result of steamboat trade, it was not until the Minneapolis and St. Louis Railway was built through town in 1873 that rapid expansion began.

With the advent of the 20th century came other industries, including the processing of beet sugar and other agricultural products; flour making, butter making, the canning of peas, corn, and tomatoes, and the curing of sauerkraut and pickles.

National polls named Chaska the eighth-best city in the United States in 2007 and 20th best in 2009. 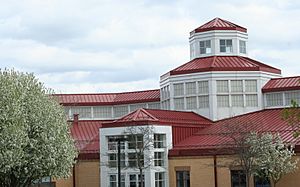 Throughout the first half of the 20th century, Chaska's population averaged about 2,000 and the nature of the city remained unchanged. The city retained its small town image until the 1950s when the transition to a metropolitan community began. The expansion of the seven county metropolitan area reached Chaska in the 1960s. With that expansion came the introduction of the Jonathan New Town design concept in 1966. The Jonathan "new town" development within Chaska brought new land, new jobs and new people to the community.

This period of transition and expansion continues today. Dozens of modern industries have located to Chaska and continue to do so; residential construction adds 300 to 400 new homes per year; commercial business continues to expand offering a variety of retail and service opportunities to its residents; redevelopment of commercial areas in the downtown began in the 1980s and still continues. Although the community has seen much growth, development regulations and sound planning have ensured Chaska's small sense of community and the preservation of its rich heritage.

In early 2005, the city of Chaska annexed the remaining portion of Chaska Township. Current plans for the area include a 600-acre (2.4 km2) residential "smart growth"-styled development.

A new spike in the population is expected after the construction of the Highway 212 freeway passing through the heart of Chaska, serving as a fast, direct, link to the heart of the Twin Cities. This freeway will include a bus rapid transit route serving Chaska with fast, efficient mass transit, along with convenient access to the Light Rail system which will soon connect the southwest suburbs to the Twin Cities of Minneapolis and St Paul.

There were 8,816 households of which 41.9% had children under the age of 18 living with them, 54.6% were married couples living together, 11.1% had a female householder with no husband present, 4.5% had a male householder with no wife present, and 29.8% were non-families. 23.9% of all households were made up of individuals and 6% had someone living alone who was 65 years of age or older. The average household size was 2.68 and the average family size was 3.22.

Johnny Cash refers to Chaska in his popular song "I've Been Everywhere" as a place he has visited.

Cheryl Strayed briefly lived in Chaska during her early life, and mentions so in her popular book Wild: From Lost to Found on the Pacific Crest Trail.

Chaska is also home of the "World's Largest" 3D printed "Mustache". Found at 516 N Pine St. in downtown Chaska, the mustache is nearly 12 feed wide, and took over 300 hours to print.

All content from Kiddle encyclopedia articles (including the article images and facts) can be freely used under Attribution-ShareAlike license, unless stated otherwise. Cite this article:
Chaska, Minnesota Facts for Kids. Kiddle Encyclopedia.