The Cheer Pheasant, (Catreus wallichii), also known as Wallich's Pheasant (in Nepal: "Kahir", "Chihir") is a vulnerable species of the pheasant family, Phasianidae. It is the only member of the genus Catreus.

The species was named as Phasianus wallichi by the English zoologist Thomas Hardwicke in 1827; he named it after the Danish botanist Nathaniel Wallich. Later the name was changed to the present name by the English ornithologist John Gould.

The Cheer pheasant lacks the color and brilliance of most pheasants. The male has a brownish yellow plumage with black markings and a long gray crest; the skin of the face is red. Its long tail is mainly gray and brown, and has 18 feathers, something that puts this pheasant apart from similar species.

The female is smaller than the male, somewhat duller in plumage and more heavily marked, with reduced red facial skin, a shorter crest and lacking the male’s spurs. 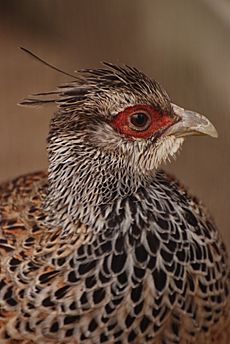 The Cheer pheasant is endemic to the western Himalayas; it is distributed in the highlands and scrublands (a place where small shrubs are abundant as well as small herbaceous plants, without trees) of the southern foothills, most frequently from 1,455 to 3,050 m (4,774 to 10,007 ft) of the western Himalayas, from north Pakistan, through Kashmir, Himachal Pradesh and Uttaranchal, India, to east to central Nepal.

Surveys in 1981 and 2003 in the Dhorpatan area of western Nepal found that there were 70 places where the birds were heard, suggesting that many birds exist in this area (approximately 200 birds). In another survey in 2010, Cheer pheasant was detected in 21 calling sites in Kullu district of Himachal Pradesh. 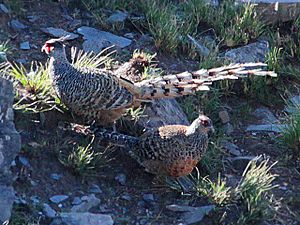 These pheasants tend to be fairly gregarious (traveling in groups) for much of the year, with groups of five to fifteen birds, but form monogamous pairs during the breeding season from late April to June. They breed on steep cliffs during summer and the number of eggs in a nest is relatively large; there are usually ten to eleven eggs in each nest, though in some cases there as many as 14.

The Cheer pheasants get most of their food from the ground, digging with is powerful beaks; they eat roots, tubers, bulbs, seeds, insects and other small animals. They look for food mainly during the morning and evening, walking in pairs or, sometimes, in family groups.

In studies made in upper Beas Valley, it was found that the Cheer pheasants were sensitive to the presence of humans.

Due to ongoing habitat loss, small population size and hunting in some areas, the Cheer pheasant is evaluated as Vulnerable on the IUCN Red List of Threatened Species. It is listed on Appendix I of CITES. The Cheer pheasant is legally protected in Nepal and India, and occurs in at least 12 protected areas in Himachal Pradesh, three in Uttar Pradesh and three in Nepal.

Attempts to reintroduce captive bred Cheer pheasants in Pakistan have been unsuccessful.

All content from Kiddle encyclopedia articles (including the article images and facts) can be freely used under Attribution-ShareAlike license, unless stated otherwise. Cite this article:
Cheer pheasant Facts for Kids. Kiddle Encyclopedia.