Cheney Reservoir is a reservoir on the North Fork Ninnescah River in Reno, Kingman, and Sedgwick counties of Kansas in the United States. Built and managed by the U.S. Bureau of Reclamation for local water supply, it is also used for flood control and recreation. Cheney State Park is located on its shore. 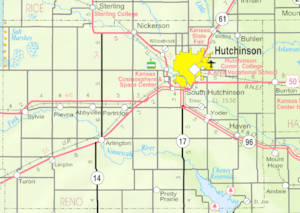 The U.S. Bureau of Reclamation, and later the Arkansas-Red-White Basin Interagency Committee established in 1950, conducted studies on the Ninnescah River basin as part of an investigation of the broader Arkansas River basin. The investigation resulted in a water-use and control plan including the construction of reservoirs and the use of available water as a regulated supply for the city of Wichita, Kansas. Wichita needed an additional water supply to supplement its existing supply wells. The water of the Arkansas River was of poor quality and too polluted to use, leaving the Ninnescah as the next closest potential source. The Bureau of Reclamation issued a report in 1957, and the U.S. Congress authorized the construction of Cheney Dam and Reservoir in 1960.

Kansas Highway 251, which runs north-south, connects the reservoir to U.S. Route 54 4 miles (6.4 km) to the south and the community of Cheney 5.5 miles (8.9 km) to the south. Below the dam, the highway becomes a paved county road and turns northeast, running parallel to the dam then finally turning east. 21st Street North, another paved county road, runs east-west immediately south of the dam.

There are two settlements at Cheney Reservoir, both unincorporated: Mount Vernon, located 1 mile (1.6 km) west of the dam, and St. Joe, located 2 miles (3.2 km) east of the reservoir's southeastern end.

The streambed underlying the reservoir has an elevation of 1,368 feet (417 m).

Cheney Dam has a structural height of 126 feet (38 m) and a length of 24,458 feet (7,455 m). At its crest, it has an elevation of 1,454 feet (443 m). Its upstream face is covered with soil cement while its downstream face consists of a 12-foot (3.7 m) layer of topsoil and grass. It has an uncontrolled spillway that leads to a conduit and stilling basin as well as two sets of outlet works: one for the river and one for Wichita's municipal water supply.

The U.S. Bureau of Reclamation owns and operates the dam and reservoir for flood control and municipal water supply purposes as part of its Wichita Project. The City of Wichita operates a pumping facility below the dam which pipes water to a treatment plant in the city. The Kansas Department of Wildlife, Parks and Tourism (KDWP) manages 5,439 acres (22.01 km2) of land around the reservoir as the Cheney Wildlife Area.

Cheney Reservoir is open for sport fishing year-round. Hunting is permitted on the public land around the reservoir although it is restricted in certain areas. In addition, certified range officers operate the Cheney Shooting Range on weekends at the north end of the Cheney Wildlife Area.

Fish species resident in the reservoir include channel catfish, crappie, striped bass, walleye, white bass, and wiper. Two invasive species, the white perch and the zebra mussel, live in the lake as well. Game animals living around the reservoir include doves, pheasants, quail, rabbits, and wild turkeys. Other land animals in the area include beavers, bobcats, muskrats, opossums, raccoons, red foxes, and skunks.

In 2016, the company MaxMind moved the default geolocation for over 600 million IP addresses to point to Cheney Reservoir. They had previously pointed to a farmhouse in Potwin, which had caused a lot of legal trouble for its residents.

All content from Kiddle encyclopedia articles (including the article images and facts) can be freely used under Attribution-ShareAlike license, unless stated otherwise. Cite this article:
Cheney Reservoir Facts for Kids. Kiddle Encyclopedia.