Chenies Manor House in the parish of Chenies in Buckinghamshire, England, is a Tudor Grade I listed building once known as Chenies Palace, although it was never a royal seat nor the seat of a bishop. It was held by the Cheney family since 1180 and passed by marriage successively to the Semark and Sapcote families and thence in 1526 to the Russell family, Earls of Bedford, later Dukes of Bedford, by whom it was held for several centuries. Although the Russells soon abandoned Chenies as its main seat in favour of Woburn Abbey in Bedfordshire, Chenies parish church remains the site of the private "Bedford Chapel", the mausoleum still in use by that family.

John Russell, 1st Earl of Bedford set about improving the house both as his home and enlarging it to the size and standard needed to house the royal court, so he could host visits from the king. The house was probably constructed by him around 1530–1550, while the significantly larger north range, which included the royal apartments, has been demolished. Russell had a meteoric career as an advisor to successive monarchs, becoming wealthy and titled and acquiring other properties. By about 1608 Woburn Abbey had become the principal family residence. Thereafter Chenies became increasingly neglected; the surviving buildings are the ones which were still considered practical.

At the northern end of the west wing, there is an undercroft from the previous medieval manor house which occupied the same site, which is a scheduled ancient monument (SM 27145).

The manor has been much changed since it was first constructed, without historical records being kept detailing this process, with the result that the exact age of the existing buildings is unclear, as is their relationship to the whole as it existed in Tudor times. Architectural historian Nikolaus Pevsner visited the manor house in the 1960s and described it as: "Beautifully mellow under the trees by the church, and archaeologically a fascinating puzzle." 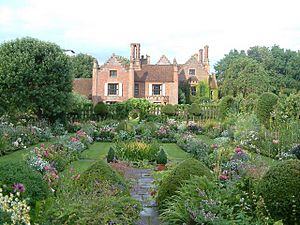 View across the gardens to the west of the manor, looking at the oldest surviving part which is now the west wing

In 2004 the British archaeological television programme Time Team undertook an archaeological dig on the site to search for evidence of former wings of the manor. It was known at the start of this process that the existing west and south wings had formed parts of a much larger building which was partially described in old documents. It was believed that there had most probably been a quadrangle with north and east wings and a grand gatehouse, later demolished when the building ceased to be owned by such a wealthy family. Time Team started by surveying the region of the existing Tudor boundary wall on the east side of this quadrangle, which it was thought could once have been part of the wall of an eastern wing, but no evidence was found that there might once have been a more substantial structure in that area. Attention then turned to the northern side of the supposed quadrangle, and evidence was indeed found for a substantial Tudor building, broadly in line with the adjacent St Michael's church and extending towards it as had been described historically. However, this was not one side of a quadrangle, but extended an equal distance west of the current west wing.

Dating evidence obtained from timbers used in the west and south wings showed the southern wing to be later in date, though still Tudor. Seven timbers from the roof of the long gallery were positively identified to have precise felling dates in the range 1547–1552, suggesting construction during the year 1552. One large beam from the floor was also tested, giving a felling range of 1540–72, consistent with the date for the roof above. The floor used a timber design with one transverse major beam and tall narrow intermediate joists spanning from it, which makes this the earliest floor to this design which has been positively dated.

Three samples with precise felling dates of 1537–38 were found in the roof of the southern part of the western wing. The northern part of the roof did not have precise dates but only a range of felling dates from 1515 to 1550, but these were consistent with the precise datings and the two separate roof sections were of similar design. Ceilings for the rooms below were an integral part of the construction, showing these had not been added later. The part of the building occupying the corner between the west and southern blocks might originally have been part of the western block, or the newer southern building. Samples obtained gave ranges of 1538–61 and 1550–80. Taken together the samples suggest the corner was contemporary with the south wing, but might also be consistent with an existing earlier part of the west wing being modified to join to the new section.

The evidence from the roof timbers suggests that at the time of the royal visit by Henry VIII, the southern wing had not existed. The building at that time may have been a 'T' shape with the long top of the 'T' formed by the now demolished buildings, and the vertical bar by the still existing south wing.

The building still lacked a formal entrance. A freestanding building still exists west of the current west wing, dating back to Tudor times. It was considered that this might have framed the formal gateway, which would have been between it and the western end of the missing north wing, facing west. Other buildings might then have framed a yard to the west of what is now the western wing. The demolished north wing was widest in the centre, with narrower extensions at either end. The excavations revealed evidence that the central block had originally had a straight northern face, overlooking formal gardens further north, which had then been remodelled with bay windows. It was estimated that the Tudor building was perhaps six times the extent of the buildings still remaining.

During the course of the excavation samples of 12th and 13th century pottery were found at various places. While this did not prove the existence of a manor house on the site at that time, it did confirm there was some sort of occupation. Taken with the existence of the Tudor and medieval buildings, plus the adjacent church, it is reasonable to assume this was also the site of Isenhamsted Manor. One piece of pottery was discovered probably dating to the early Bronze Age.

The manor has been used many times in television programmes, such as To Play the King and also Midsomer Murders. It has also been used for scenes in dramatisations of classic period novels such as by Jane Austen and more recently the TV serial Little Dorrit, based on the eponymous book by Charles Dickens, in 2008.

In 1999 it appeared as the big house in the film Tom's Midnight Garden. In 2007 it was used as a location for the Woody Allen film Cassandra's Dream. Actors Ewan McGregor and Colin Farrell filmed scenes in the garden area.

The gardens, famous for their tulips, are promoted by the Campaign to Protect Rural England.

All content from Kiddle encyclopedia articles (including the article images and facts) can be freely used under Attribution-ShareAlike license, unless stated otherwise. Cite this article:
Chenies Manor House Facts for Kids. Kiddle Encyclopedia.