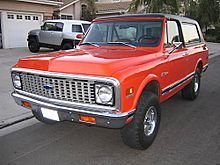 The K5 Blazer was the smallest full-size SUV version of the Chevrolet C/K Truck family. It was added to the Chevrolet line in 1969. The full-size Blazer was replaced in 1995 by the Chevrolet Tahoe. In 1970, GMC introduced its own model of the truck, called the Jimmy.The Blazer name was also discontinued in 1994 and replaced by the GMC Yukon. However the Blazer has a re-design in 1992 in which would later become the Tahoe in 1995. Both were based on the short wheelbase trucks. They were available with either rear-wheel drive or four-wheel drive. The K5 Blazer and Jimmy had "full convertible" removable tops until 1975. In 1976, GM introduced a half-cab design that was less prone to leaks. It was slightly safer in a rollover accident. These half cabs also had a removable top section. It started at a few inches behind the driver/passenger doors all the way back to the tailgate.

The Blazer was designed and marketed to compete with International Harvester Scout and the Ford Bronco. Both of these were originally aimed at the short Jeep CJ series. But all three were much smaller than other trucks. The Blazer was a shortened pickup truck. This gave it increased interior space. It also lowered the cost of production with a shared platform. The Blazer quickly became popular. For the first time, it married the off-road capabilities of the Scout with the "luxury" features like air conditioning and automatic transmissions. At that time were usually available on cars. By 1970, the Blazer was already outselling both of its older rivals. It took Jeep (with the Cherokee) and Dodge (with the Dodge Ramcharger) to introduce similar models. Ford did not have a competing model until 1978 (Ford F-Series pickup).

The two-wheel drive version came with independent front suspension and rear trailing arms, both with coil springs. The four-wheel drive version had a solid front axle and used leaf springs front and rear. Both versions used drum brakes at all four wheels until 1971. This is when the entire GM light truck line got standard front disc brakes. A tachometer was optional. 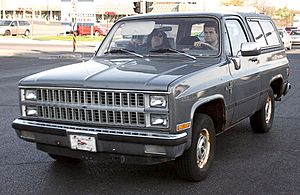 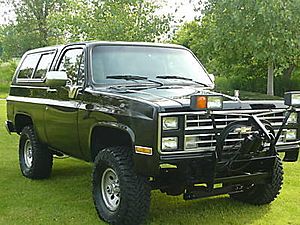 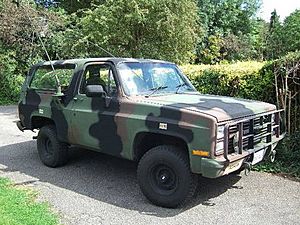 In 1973, GM's line of full-size trucks was redesigned and updated. A tilt-steering wheel became optional. Although rear-wheel drive Blazers were manufactured until 1982, the majority sold were four-wheel drive.

The GMT400 platform was introduced in the spring of 1987 as for the 1988 model trucks. However, the K5 Blazer, Suburban, and crew-cab (four-door) trucks kept the earlier platform until 1991. In 1989, the front grille was changed to look like the ones used on the GMT400 series of pickups.

The second generation K5 models made the rear hatch glass and tailgate into a single unit. This allowed the glass panel to retract inside the tailgate. It used either a manual handle or an electric motor to raise and lower the glass. For better fuel economy second generation Blazers used the smaller displacement 305 V-8. These engines produced nearly as much torque as the 350 V-8. However, these engines were not as powerful and prone to detonation (engine knocking). After 1987, when throttle-body injection was introduced in the truck engines, the 350 was made the standard engine.

Around 1981, a prototype K5 Blazer was used as a testbed for a military CUCV vehicle. Between 1983 and 1987, what is known as the M1009 CUCV was the production military version of the civilian K5. The differences are the lack of an air conditioner. They had an additional leaf spring in the suspension. Instead of the normal 12 V car battery the military version used a hybrid 12/24 volt system. It also had blackout headlights, front mounted brush guard, a rifle rack and special paint jobs. A majority of them are painted olive drab green or in the woodland camouflage pattern. Some M1009s that saw desert use were painted tan. All M1009s are powered with the 6.2 L Diesel engine. Some decommissioned M1009s end up in law enforcement use (for example with the Los Angeles County Sheriff's Department). Some were sold through government auctions. A few are still in use by the National Guard.

All content from Kiddle encyclopedia articles (including the article images and facts) can be freely used under Attribution-ShareAlike license, unless stated otherwise. Cite this article:
Chevrolet K5 Blazer Facts for Kids. Kiddle Encyclopedia.