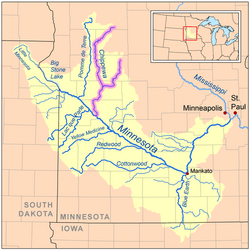 The river was named after the Chippewa Indians. 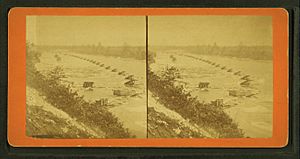 Stereoscopic photo of the Chippewa River by Benjamin Franklin Upton

The Chippewa River issues from Stowe Lake in Douglas County, 3 miles (5 km) northwest of Brandon, at the west end of a series of lakes that extends northward to lakes Aaron and Moses and eastward to Chippewa Lake. The Chippewa River passes through several more lakes in its upper course. It initially flows westwardly into Grant County, where it turns generally southward for the remainder of its course through Pope, Stevens, Swift and Chippewa counties. The river passes the towns of Hoffman, Cyrus and Benson; it joins the Minnesota River in Montevideo. Some sections of the river, especially along its middle course in Pope and Swift Counties, have been straightened and channelized.

In Pope County, the river collects the Little Chippewa River, 41 miles (66 km) long, which flows generally southwestwardly through Douglas and Pope counties. At Benson it collects the East Branch Chippewa River, about 64 miles (103 km) long, which rises in southeastern Douglas County and flows initially southward through Pope County, passing through several lakes, into Swift County, where it turns westward.

At Watson, MN, the river has an average flow of 236 cubic feet per second.

All content from Kiddle encyclopedia articles (including the article images and facts) can be freely used under Attribution-ShareAlike license, unless stated otherwise. Cite this article:
Chippewa River (Minnesota) Facts for Kids. Kiddle Encyclopedia.