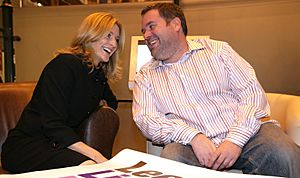 Chris Moyles is a British radio and television presenter. He presents a breakfast radio show on BBC Radio 1. He was born on 22 February 1974 in Leeds. His career in radio started at age 14, when he worked on a hospital radio. He worked at lots of different stations until he got a job at BBC Radio 1 in 1997. When he took over the Breakfast show from fellow DJ Sara Cox he quickly brought more listeners to the show. He won awards for his show.

Moyles wrote an autobiography called The Gospel According to Chris Moyles: The Story of One Man and his Mouth.

All content from Kiddle encyclopedia articles (including the article images and facts) can be freely used under Attribution-ShareAlike license, unless stated otherwise. Cite this article:
Chris Moyles Facts for Kids. Kiddle Encyclopedia.