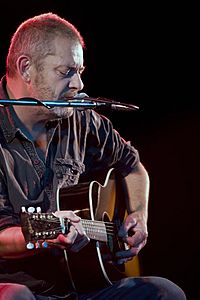 He played harmonica, saxophone, and guitar. He performed as part of the Sole Twisters, Harem Scarem and Paul Kelly and the Coloured Girls, and fronted his band Crown of Thorns.

He was born in Melbourne. Wilson's death was announced on 16 January 2019 from pancreatic cancer at the age of 62.

All content from Kiddle encyclopedia articles (including the article images and facts) can be freely used under Attribution-ShareAlike license, unless stated otherwise. Cite this article:
Chris Wilson (Australian musician) Facts for Kids. Kiddle Encyclopedia.