Christmas Creek is a locality in the Scenic Rim Region of South East Queensland, Australia. The eastern border of the locality is marked by the high point of the JinBroken Range while the west is similar defined by another ridgeline. Christmas Creek, a tributary of the Logan River flows in north/south direction roughly parallel to the only main road in the area called Christmas Creek Road. 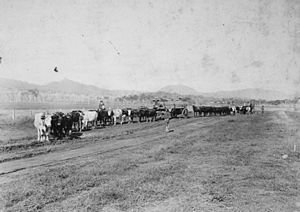 Like many places in South East Queensland the first industry to developed was timber-getting. Agriculture soon became the area's main industry.

The Beaudesert Shire Tramway had a station at Christmas Creek. The station was once known as Lillybank and for several years was the line's terminus.

All content from Kiddle encyclopedia articles (including the article images and facts) can be freely used under Attribution-ShareAlike license, unless stated otherwise. Cite this article:
Christmas Creek, Queensland Facts for Kids. Kiddle Encyclopedia.