The Church of Our Lady of the Assumption and St. Gregory is a Roman Catholic church on Warwick Street, Westminster. It was formerly known as the Royal Bavarian Chapel, because like several Roman Catholic churches in London it originated as a chapel within a foreign embassy. It was built between 1789 and 1790 to the designs of Joseph Bonomi the Elder. The only surviving eighteenth century Roman Catholic chapel in London, it is a Grade II* listed building. 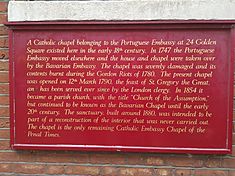 History plaque on the church

The origins of the church lie in the chapel established in the 1730s at the Portuguese Embassy on 24 Golden Square. At this time, with the English Penal Laws in force, most Roman Catholic chapels existed under the protection, and within the precincts, of foreign embassies. Responsibility for the chapel passed to the Bavarian embassy in 1747 but it was destroyed in the Gordon Riots in 1780. The replacement church was designed by Joseph Bonomi the Elder, an Italian architect and draughtsman, who had moved to London in 1767 to work in the practice of Robert and James Adam. Prayers continued to be said for the King of Bavaria, and the church described as the Royal Bavarian Chapel, until 1871.

The church has attracted many prominent Catholic worshippers, including Mrs Fitzherbert, who was sacramentally, but not civilly married to George IV, and the young Cardinal Newman. The Irish politician Daniel O'Connell attended regularly when in London. The Victorian explorer and translator of the Kama Sutra Sir Richard Burton married in the church and the novelist Evelyn Waugh had his second wedding here in 1937. In 1983, the funeral Mass for Ralph Richardson, a regular worshipper, was held at the church.

In the early 21st century, the church was the home of "one of the most successful LGBT Catholic parishes in the world". For six years, these "Soho masses" offered twice-monthly services “particularly welcoming to lesbian, gay, bisexual and transgendered Catholics, their parents, friends and families”. In 2013, under pressure from the Vatican, they were forced to move to the Church of the Immaculate Conception, Farm Street in nearby Mayfair; Archbishop Vincent Nichols attended their first Mass there in 2013. In the same year the church was entrusted to the Personal Ordinariate of Our Lady of Walsingham.

The exterior is of plain brick, stained red in 1952. The brick facade was deliberately "unassuming", in response to the destruction of the earlier chapel, and the gilded stars and angels which now decorate the facade date from the 1950s. It is of three bays and two storeys.

The interior retains some of its Georgian decoration, but the church was restored and altered in the Victorian period, firstly in renovations carried out by John Erlam, in 1853, which also saw the installation, over the altar, of the bas-relief of the Assumption, by John Edward Carew. A second period of restoration took place from 1874, under the direction of John Francis Bentley, the architect of Westminster Cathedral.

All content from Kiddle encyclopedia articles (including the article images and facts) can be freely used under Attribution-ShareAlike license, unless stated otherwise. Cite this article:
Church of Our Lady of the Assumption and St Gregory Facts for Kids. Kiddle Encyclopedia.