Claiborne is an unincorporated community in Talbot County, Maryland. The village is located on the eastern shore of the Chesapeake Bay near the mouth of the Eastern Bay at 38°50′15″N 76°16′40″W﻿ / ﻿38.83750°N 76.27778°W﻿ / 38.83750; -76.27778, and uses ZIP code 21624. The 2000 U.S. Census lists the population as 147 and the number of homes as 84, slightly down from its 1941 population of 156. Between 1890 and 1952, the village was a busy port for passenger and then automobile ferry service across the Chesapeake Bay, with numerous stores and motels/resorts, including Maple Hall. A post office was added in 1893 and the Protestant Episcopal Church of Claiborne was built in 1898. In 1912 an elementary school and Methodist Church were added. Before 1912, students attended school in nearby McDaniel. The town's first school consisted of the kitchen of the local railroad pavilion, used as a classroom, where Miss Dolly Thompson taught. Teachers in later years included Grace Oldham, Alice Dawson, Edna Harrison, and Lida Smith. In 1913, the town became home to the Claiborne Fresh Air Association, Inc., (“Miracle House”) which was formed for the purpose of providing 10 weeks of fresh air and summer vacation for children who had been exposed to tuberculosis.

Prior to the 1870s, Claiborne was part of the nearby McDanieltown postal community (now McDaniel). Its name can be traced back in honor of William Claiborne, a fur trader who founded an English settlement on nearby Kent Island in 1631. Early land patents in Claiborne included "Rich Neck Manor," which was first granted 2,000 acres to Capt. William Mitchel, Esq. in 1649<The WPA Guide to Maryland: the Old Line State, tour 3.> Subsequent owners of Rich Neck, Philip Land, built a chapel in the 1650s. The Rich Neck Manor Chapel still stands, but is private property. Rich Neck was also home to Matthew Tilghman, the head of the Maryland delegation to the Continental Congress, and Lloyd Tilghman, Confederate general.

It was past the entrance to today's Claiborne harbor that British vessels passed during the War of 1812, landing in McDanieltown, within sight of Claiborne.

The area of town now known as "Old Claiborne," was located on Tilghman’s Creek facing the Miles River. It included a steam sawmill started by John Hansel Tunis around 1867. "Bingham's Steamboat Wharf" was also in use for steamboats on their way up the Miles River to St. Michaels. By 1877, John Tunis' son, Joseph Tunis, had added the Claiborne Oyster Company, a boatyard, a few homes, two more steamboat wharves, and expanded his father's sawmill into the Claiborne Saw and Planing Mills. At the foot of Rich Neck Road was a general store. Tunis also laid out grids for a new community of 188 lots and advertised them for between $18 and $40. A plat of it appears in an 1877 county atlas, showing eight main streets with the names: Rich Neck Road, Leeds, Ward, Progress, Monument, Tilghman, and Dom Pedro. At its center was Henry Clay Square, a large area reserved for public buildings. Joseph Tunis provided a slogan: “Young man don’t go West, but to Claiborne.” The village did not develop as Tunis had hoped and by 1893, Tunis had abandoned his plans. In later years several families from North Carolina who knew or where employed by the Tunis family in their North Carolina lumber mills relocated to "Old Claiborne", for example Ben Perry whose home in "Old Claiborne" was built in 1905.

A second community, the "new" Claiborne, was started in 1886 when Gen. Joseph B. Seth and the Baltimore & Eastern Railroad Company agreed to begin ferry and railroad service between Claiborne and Bay Ridge, on the western shore of the Chesapeake Bay. Seth along with Theophilus Tunis and Frank Turner envisioned a resort community similar to Bay Ridge and laid out plans for the "new" Claiborne, calling it "Bay City”.

Although "Bay City" never developed as expected, Claiborne’s importance was raised once the ferries began operating with Claiborne as a primary terminus on the Eastern Shore. In 1890 the Baltimore & Eastern Railroad completed a railroad line from Claiborne to Easton so that passengers coming into Claiborne could continue through to Ocean City. Later operated by the Baltimore, Chesapeake, & Atlantic Railway, the railroad service continued until 1928, although by 1924 the BC&A had already shifted most of its traffic to Love Point. In 1927 the Baltimore, Chesapeake, & Atlantic Railway filed for bankruptcy and was sold at foreclosure on March 28, 1928. One parcel was for the company's railroad and the Claiborne ferry, and was sold for $650,000.

The ferry operation by the Baltimore, Chesapeake, & Atlantic Railway was almost halted in 1915 due to a decision of the Interstate Commerce Commission against the BC&A's parent company, the Pennsylvania Railroad, dictating that the company surrender some of the steamboat lines which they operated on the Chesapeake Bay. In the end, the Pennsylvania Railroad had to sell off or end all its ferry lines operating between Baltimore and points on the Eastern Shore other than the one at Claiborne.

A second ferry company, owned by the son of Hetty Green, began service in 1916 between Claiborne and Annapolis using the steam yacht "Texas". The business failed in 1919.

In 1919, a competing ferry, the Claiborne-Annapolis Ferry Company, began service between Claiborne and Annapolis. On Sunday evening it was not uncommon for traffic to be backed up several miles into Claiborne, waiting for the return ferry trip across the Chesapeake Bay. The increased automobile traffic to Claiborne forced the state to take the then unusual step of passing a special roads bill to improve the road between Claiborne and Easton, Maryland. In 1921, bus service was added from Claiborne to Easton, Hurlock, and Cambridge. This may have been in part because of accusations that the BC&A's passenger railroad service out of Claiborne would often intentionally leave early to strand passengers arriving on the competing boats of the Claiborne-Annapolis Ferry Company. In 1938 the ferry route was changed to run from Claiborne to Romancoke on Kent Island, and then Matapeake on Kent Island to Sandy Point, on the western shore. Ferry service stopped running in 1952 when the Chesapeake Bay Bridge was built.

Jolly Sam, the Christmas pony, now resides at Mineral Spring Farm, in Claiborne, he arrived in early spring 2007. Claude W. Somers was listed on the National Register of Historic Places in 1985. 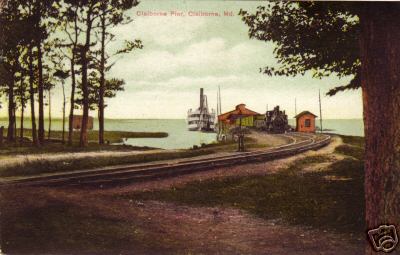 "Denton Journal", 17 Jan 1920. article: "The Governor has decide to have the Claiborne road built"

All content from Kiddle encyclopedia articles (including the article images and facts) can be freely used under Attribution-ShareAlike license, unless stated otherwise. Cite this article:
Claiborne, Maryland Facts for Kids. Kiddle Encyclopedia.