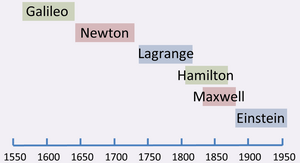 Classical physics refers to theories of physics that predate modern, theories. As such, the definition of a classical theory depends on context. Classical physical concepts are often used when modern theories are unnecessarily complex for a particular situation.

Among the branches of theory included in classical physics are:

In contrast to classical physics, "modern physics" is a slightly looser term which may refer to just quantum physics or to 20th and 21st century physics in general. Modern physics includes quantum theory and relativity, when applicable.

A physical system can be described by classical physics when it satisfies conditions such that the laws of classical physics are approximately valid. In practice, physical objects ranging from those larger than atoms and molecules, to objects in the macroscopic and astronomical realm, can be well-described (understood) with classical mechanics.

A computer model would use quantum theory and relativistic theory only

Today a computer performs millions of arithmetic operations in seconds to solve a classical differential equation, while Newton (one of the fathers of the differential calculus) would take hours to solve the same equation by manual calculation.

All content from Kiddle encyclopedia articles (including the article images and facts) can be freely used under Attribution-ShareAlike license, unless stated otherwise. Cite this article:
Classical physics Facts for Kids. Kiddle Encyclopedia.