Aiken began his rise to fame placing second on the second season of the television program American Idol in 2003. He and the 2003 Winner Ruben Studdard were both offered recording contracts by RCA Records, and his multi-platinum debut album Measure of a Man was released in October 2003.

Clay is reportedly one of the top 10 earners of Idol, earning an estimated $1.5million in 2010.

Aiken made his Broadway debut playing the role of Sir Robin in Monty Python's Spamalot in January 2008. 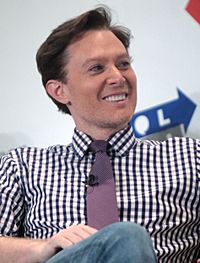 Aiken started at an early age to believe in a life of service. In 1995, Clay started working at the YMCA. Still in high school, Clay learned quickly that he could make a difference in the lives of young people.

At 19, Clay taught at Brentwood Elementary School in a class of kids with autism. It was during that experience that he decided to finish college and become a special education teacher.

Aiken created the National Inclusion Project (formerly the Bubel/Aiken Foundation) in 2003, and he accepted a UNICEF ambassadorship in 2004, a position he held for 9 1/2 years until 2013 when he gave it up in order to run for Congress. He was the "UNICEF Ambassador of Education for All Children Worldwide"; he traveled extensively on their behalf in this role. In 2006, he was appointed for a two-year term to the Presidential Committee for People with Intellectual Disabilities.

In 2012, Aiken was the runner-up on the fifth season of The Celebrity Apprentice, raising US $361,500 for the National Inclusion Project. 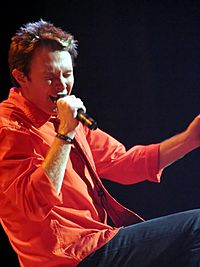 On August 8, 2008, Aiken announced, on his personal blog, the birth of his son in North Carolina: "My dear friend, Jaymes, and I are so excited to announce the birth of Parker Foster Aiken."

After several years of public speculation, Aiken came out as gay in a September 2008 interview with People magazine. In April 2009, Aiken was honored by the Family Equality Council advocacy group at its annual benefit dinner in New York City.

On November 18, 2010, Aiken went to Washington, D.C., on behalf of Gay, Lesbian and Straight Education Network (GLSEN) at a Capitol Hill briefing talking about anti-gay bullying.

Aiken has made many television appearances.

On Labor Day 2003, Aiken sang "Bridge Over Troubled Water" at the Jerry Lewis MDA Telethon and received a standing ovation from the audience. Lewis compared Aiken with Frank Sinatra

That same year, Aiken sang "The Star-Spangled Banner" on the opening night of the 2003 World Series and appeared in numerous television specials during the winter of 2003.

On July 4, 2004, Aiken was one of the performers in the A Capitol Fourth concert in Washington, D.C. and performed in the Good Morning America Summer Concert Series in 2004 and 2005. He also sang "Isn't She Lovely" on the popular television show Scrubs.

Aiken was the musical guest on Saturday Night Live in 2004 and participated in several skits. He has appeared multiple times on The Tonight Show, interviewing with Jay Leno as a guest in addition to singing, and has become a regular guest on Jimmy Kimmel Live!.

Recently, Aiken guest starred on the comedy drama series Drop Dead Diva. He has guest starred in many other television shows also.

All content from Kiddle encyclopedia articles (including the article images and facts) can be freely used under Attribution-ShareAlike license, unless stated otherwise. Cite this article:
Clay Aiken Facts for Kids. Kiddle Encyclopedia.