Clearfield is a city in Davis County, Utah, United States. The population was 31,364 at the 2020 census. The city grew rapidly during the 1940s, with the formation of Hill Air Force Base, and in the 1950s with the nationwide increase in suburb and "bedroom" community populations and has been steadily growing since then.

Clearfield is a principal city of the Ogden–Clearfield, Utah Metropolitan Statistical Area, which includes all of Davis, Morgan, and Weber counties.

Clearfield was one of the last communities to be settled in the northern part of Davis County (1877). Hunters and Native American Warriors knew this land before the first white man settled here. They referred to it as the land of wind and sand. But it was the roar of the train’s engine that first awakened the area in 1869 and stirred the sleeping Sand Ridge, which it was once known as until the name was later changed to Clearfield in order to attract agricultural settlers.

There was no water for those early families until wells could be successfully dug. The only water available at first had to be hauled in large barrels from Kays Creek in East Layton. But the great event that did more to transform the bleak Sand Ridge into a fertile garden spot was the coming of the Davis and Weber Counties Canal in 1884. This caused an immediate population boom in the area as people plowed up the sagebrush, cactus, and prickly pears, and homes and farms began to appear throughout the area.

Many Clearfield children went to school in nearby Syracuse by walking several miles a day. In 1907, the new Clearfield Elementary School opened its doors to those same children. The school taught first through eighth grades and operated until 1923 when it was destroyed by fire. The new building later acquired the name Pioneer School.

North Davis Junior High School was built and opened its doors in 1939. The building cost approximately $170,000 to build. That first year, there were 18 faculty members and 585 students.

Throughout the following years, Clearfield was known as a peaceful farming community. However, the addition of defense installations in the areas changed the agricultural community. Construction began on Hill Field (Hill Air Force Base) in 1940 and the facility eventually stretched along the eastern border of Clearfield. The base has since provided many jobs for civilians and is one of Utah's major employers.

On the southwestern side of Clearfield, the U.S. Navy installed the Clearfield Naval Supply Depot in 1943. Clearfield was considered a prime location for the depot because of its relative security from enemy attack, nearby air transportation at Hill Air Force Base, and the proximity of railroads and highways. The dry climate was ideal for storage, and there was a good supply of manpower.

Another more modern school, South Clearfield Elementary, was added during 1950 to help keep pace with the growing population.

The early winter of 1959 saw the beginnings of Clearfield High School, the first high school in northern Davis County.

The Clearfield Naval Supply Depot was eventually phased out by 1962 but the facility did not stay empty for long. Private firms soon began moving into the large warehouse buildings. The area became known as the Freeport Center and today is a major western hub for manufacturing, warehousing, and distribution.

Hill Field Elementary opened in 1963 and is located just west of the west border of Hill Air Force Base.

The Clearfield Job Corps Center was established in 1966. This facility is located west of the Freeport Center on Antelope Drive. It was established to provide training to unemployed and unskilled youth 16 to 21 years old.

In 1981, Holt Elementary opened at the northwest corner of the city, near Steed Park.

Clearfield’s premier office and commercial center, Legend Hills, is also the largest office development space in north Davis County. The first phase of Legend Hills was built in 2002 on the city’s east side, just east of the frontage road along Interstate 15. 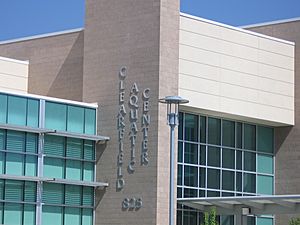 Clearfield High School underwent a major renovation in 2006, including the main auditorium and computer upgrades.

The opening of the Utah Transportation Association (UTA) FrontRunner commuter rail stop in Clearfield in 2008 helped the city emerge as a centralized location of business, public and community development. 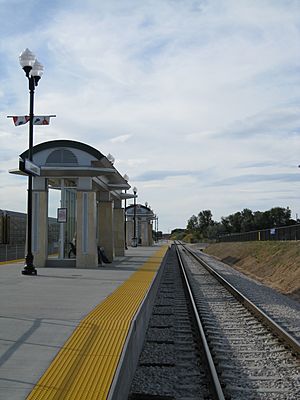 Clearfield City has a total land area of 7.8 square miles (20.1 km2), and a population of 30,112 as of the 2010 Census, making it the third largest city in Davis County, behind Layton and Bountiful. This creates a population density of 1498.1 people per square kilometer, or 3860.5 people per square mile. Clearfield City has an average elevation of 4,327 feet (1,320 m) above sea level. The lowest point within the boundaries of the city is 4,314 feet (1,315 m) at the intersection of 1000 West and Antelope Drive on the city’s western edge and the highest is 4,711 feet (1,436 m) at a point that is within the city’s northeast corner, but physically located on Hill Air Force Base property along Constitution Way in their housing area. (AGRC)

The city is located in the north central portion of Davis County. The county is surrounded by the Great Salt Lake to the west and the steep Wasatch mountain range on the east, although neither of these notable natural landmarks is physically within the city boundaries. Directly encircling Clearfield are the cities/areas of Sunset City to the north, Clinton City to the northwest, Syracuse City and West Point City to the west, Layton City to the south and east, and Hill Air Force Base military installation to the northeast.

There are no major lakes or rivers within the city. There are a few small ponds, mostly at public parks or on privately owned property. The only significant waterway in the city is the Weber and Davis Canal along the east and northeast edge of the city that extends both north and south of the city boundaries. The Clearfield Canal Trail parallels the canal for a portion of its trip through Clearfield. The Great Salt Lake is separated from Clearfield City by marshlands, mudflats and the cities in between. The metabolic activities of bacteria in the lake result in a phenomenon known as "lake stink", a scent similar to sulfur, once or twice a year for a few hours.

The highest mountaintops visible from Clearfield City are Deseret Peak in Tooele County at 11,031 feet (3362 m), Ben Lomond Peak in Weber County at 9712 feet (2960 m), and Thurston Peak, just to the west of Clearfield at 9,706 feet (2958 m). Ben Lomond Peak and Thurston Peak are located in the Wasatch Range. The Wasatch Fault is found along the western base of the Wasatch Range and is considered overdue for an earthquake as large as 7.5. Catastrophic damage is predicted in the event of an earthquake with major damage resulting from the liquefaction of the clay- and sand-based soil. The largest earthquake that has occurred near Clearfield City in the recorded past occurred on 12/7/1967, and was 21.5 miles away in Park City, Utah and registered at magnitude of 4.3.

The Wasatch Front valley floor is the ancient lakebed of Lake Bonneville which existed at the end of the last Ice Age. Several Lake Bonneville shorelines can be distinctly seen on the foothills or benches of nearby mountains.

The streets of the city, along with the rest of Davis County north of Layton, are laid out on a unified grid plan. Most major streets run very nearly north-south and east-west. Clearfield City is the farthest east on this grid, while Syracuse, West Point, Sunset, Clinton and Unincorporated Davis County all are located north, west and south on the same street grid.

Clearfield City has many informal neighborhoods, most of which are more business or industrial related than residential. In the southwestern portion of the city is a large industrial business center called The Freeport Center, and the Clearfield Job Corps. Having the Job Corps next to one of the largest industrial centers in Northern Utah allows for on the job training for many of the programs offered. The Freeport Center began life in the 1940s as the Clearfield Naval Supply Depot, but was phased out in 1962 and private firms began moving in.

South Clearfield is a residential neighborhood that is of note due to its isolation as the southernmost section of the city. It is cut off from the rest of residential Clearfield by The Freeport Center and other businesses, as well as being surrounded by other cities on 3 of the 4 sides of the area.

The presence of Hill Air Force Base has helped in creating two business neighborhoods. Falcon Hill is a 550-acre planned development underway on the west and southwest portion of the base that will be on leased federal government land, but all services and building will be public at any areas located outside the fence line of the base. It is a planned aerospace research complex with space both inside and outside of the base fence line. (Commercial) Legend Hills is an office and retail oriented business area located in the southeastern most corner of the city. It contains many different retail spaces and business offices in the numerous office towers. All areas are easily accessed off Interstate 15, which runs north-south through the eastern edge of the city.

The climate of Clearfield City is characterized as semi-arid, with four distinct seasons. Both summer and winter are long, with hot, dry summers and cold, snowy winters, and with spring and fall serving as brief but comfortable transition periods. The city receives 20.75 inches (527 mm) of precipitation annually. Spring is the wettest season (May is the wettest month), while summer is very dry. Snow occurs on average from November to April, producing a total average of 24 inches (61 cm) yearly.

The primary source of precipitation in Clearfield City is massive Pacific storms that move in from the Pacific Ocean along the jet stream from approximately October through May. Particularly cold storms have brought measurable snow as early as September and as late as May. After the Pacific train of storms has shut off and the jet stream has retreated far to the north during summer, the primary source of precipitation is afternoon thunderstorms generated by monsoon moisture moving up from the Gulf of California during mid-to-late summer. Although rainfall can be heavy, these storms are usually scattered in coverage and rarely severe.

Clearfield City features large variations in temperatures between seasons. The hottest month is July, and the coldest is January. The average temperature over the year is 53 °F. The record high temperature is 108 °F (42 °C), which occurred in July 2002, while the record low is −26 °F (−32 °C), which occurred in January 1937. During mid-winter, strong areas of high pressure often situate themselves over the Great Basin, leading to strong temperature inversions. This causes air stagnation and thick smog in the valley from several days to weeks at a time and can result in the worst air-pollution levels in the U.S., reducing air quality to unhealthy levels. Aside from occasional heavy snows in winter, severe weather is very rare. 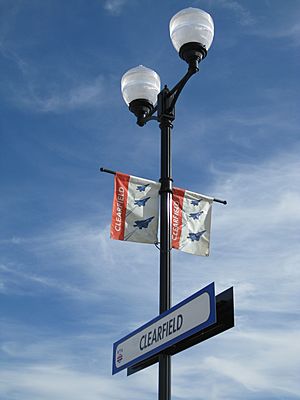 Freeport Center The Freeport Center is a manufacturing, warehousing, and distribution center. It is home to more than 70 national and local companies that have a combined workforce of over 7,000 employees. Freeport Center has an excellent transportation network of highways and railroads, and is only 20 miles from the Salt Lake International Airport.

Legend Hills Legend Hills is an office development in northern Davis County. Located on the east side of Clearfield, and bordering Interstate 15.

All content from Kiddle encyclopedia articles (including the article images and facts) can be freely used under Attribution-ShareAlike license, unless stated otherwise. Cite this article:
Clearfield, Utah Facts for Kids. Kiddle Encyclopedia.