Climate of Alabama facts for kids 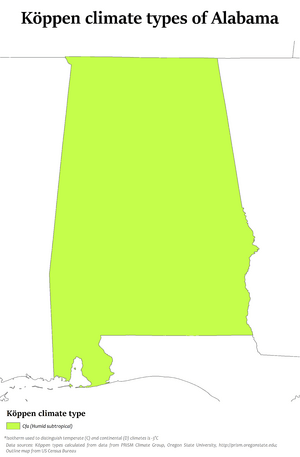 The state is classified as humid subtropical (Cfa) under the Köppen climate classification. The average annual temperature is 64 °F (18 °C). Temperatures tend to be warmer in the southern part of the state with its proximity to the Gulf of Mexico, while the northern parts of the state, especially in the Appalachian Mountains in the northeast, tend to be slightly cooler. Generally, Alabama has very hot summers and mild winters with copious precipitation throughout the year. Alabama receives an average of 56 inches (1,400 mm) of rainfall annually and enjoys a lengthy growing season of up to 300 days in the southern part of the state. Hailstorms occur occasionally in the spring and summer, but are seldom destructive. Heavy fogs are rare, and are confined chiefly to the coast. Thunderstorms occur throughout the year - they are most common in the summer, but most severe in the spring and fall, when destructive winds and tornadoes occasionally occur. Hurricanes are quite common in the state, especially in the southern part, and major hurricanes occasionally strike the coast which can be very destructive. 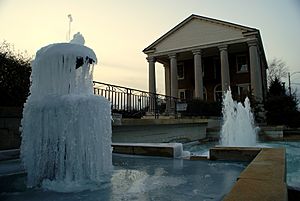 Though winters in the state are usually mild, nightly freezing occurs frequently in the North Alabama region. This is shown in this picture taken at the Old State Bank in Decatur during early January.

Summers in Alabama are one of the hottest in the United States, with high temperatures averaging over 90 °F (32 °C) throughout the summer in many parts of the state. The heat of summer is tempered in the extreme south by the winds from the Gulf of Mexico which often blow inland by up to 10–15 miles, and in the north by the elevation above the sea. Afternoon high temperatures are highest in Montgomery (92.4 degrees daily from June through August) and in Tuscaloosa. The average nighttime humidity is highest in southwest Alabama, which results in the highest average (high plus low temperature) for reporting stations in the state. While afternoon highs in Mobile are cooler than their inland sister cities, the remaining warm air trapped near the Gulf at night results in the average annual temperature for Mobiles being the highest in the southwest along the coast. Cool morning temperatures help keep the northeast highlands among the more temperate locations in the state and lowest in the northeast among the highlands. Thus at Mobile the annual mean is 67 °F (19 °C), the mean for the summer 81 °F (27 °C), and for the winter 52 °F (11 °C); and at Valley Head, in De Kalb county, the annual mean is 59 °F (15 °C), the mean for the summer 75 °F (24 °C), and for the winter 41 °F (5 °C). At Montgomery, in the central region, the average annual temperature is 66 °F (19 °C), with a winter average of 49 °F (9 °C), and a summer average of 81 °F (27 °C). The average winter minimum for the entire state is 35 °F (2 °C), and there is an average of 35 days in each year in which the thermometer falls below the freezing-point. At extremely rare intervals the thermometer has fallen below zero (-18 °C), as was the case in the remarkable cold wave of the 12th-13 February 1899, when an absolute minimum of -17 °F (-29 °C) was registered at Valley Head. The highest temperature ever recorded was 111 °F (44 °C) in Centreville in 1925. Close competing temperatures occurred in 2007 when during the August heat wave, three instances of official 108 degree heat were recorded at Maxwell AFB in Montgomery, each tying the all-time record for the capital city. Winters are generally mild in Alabama, as they are throughout most of the southeastern United States, with average January low temperatures around 40 °F (4 °C) in Mobile, around 31 °F (−1 °C) in Huntsville, around 35 °F (2 °C) in Montgomery, and around 33 °F (1 °C) in Birmingham.

The amount of precipitation is greatest along the coast (62 inches/1,574 mm) and evenly distributed through the rest of the state (about 52 inches/1,320 mm). Much of the rainfall is produced by thunderstorms and, occasionally, by Hurricanes and other tropical disturbances. Although snow is a rare event in much of Alabama, areas of the state north of Montgomery may receive a dusting of snow a few times every winter, with an occasional moderately heavy snowfall every few years. Historic snowfall events include New Year's Eve 1963 snowstorm and the 1993 Storm of the Century. The annual average snowfall for the Birmingham area is 2 inches (51 mm) per year. In the southern Gulf coast, snowfall is less frequent, sometimes going several years without any snowfall. Heavy snowfall can occur, such as during the New Year's Eve 1963 snowstorm and the 1993 Storm of the Century. 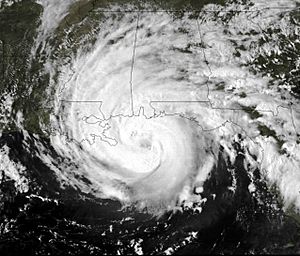 Hurricane Frederic, a major hurricane which struck Alabama in September 1979

Alabama is also prone to tropical storms and even hurricanes. Areas of the state far away from the Gulf are not immune to the effects of the storms, which often dump tremendous amounts of rain as they move inland and weaken. Thunderstorms are common during the summer throughout Alabama and also occur during other times of the year including winter. South Alabama reports many thunderstorms. The Gulf Coast, around Mobile Bay, averages between 100 and 110 days per year with thunder reported, which eastern and northwest Alabama have 70 to 80 thunderstorm days per year. Occasionally, thunderstorms are severe with frequent lightning and large hail – the central and northern parts of the state are most vulnerable to this type of storm. Alabama ranks seventh in the number of deaths from lightning and ninth in the number of deaths from lightning strikes per capita.

Sometimes tornadoes occur – these are common throughout the state, although the peak season for tornadoes varies from the northern to southern parts of the state. Alabama, along with Kansas, has the most reported EF5 tornadoes than any other state – according to statistics from the National Climatic Data Center for the period January 1, 1950, to October 31, 2006. An F5 tornado is the most powerful of its kind. Several long – tracked F5 tornadoes have contributed to Alabama reporting more tornado fatalities than any other state except for Texas and Mississippi. The Super Outbreaks of April 1974 and April 2011 both badly affected Alabama. The northern part of the state – along the Tennessee Valley – is one of the areas in the US most vulnerable to violent tornadoes . The area of Alabama and Mississippi most affected by tornadoes is sometimes referred to as Dixie Alley, as distinct from the Tornado Alley of the Southern Plains. Alabama is one of the few places in the world that has a secondary tornado season (November and December) along with the spring severe weather season.

All content from Kiddle encyclopedia articles (including the article images and facts) can be freely used under Attribution-ShareAlike license, unless stated otherwise. Cite this article:
Climate of Alabama Facts for Kids. Kiddle Encyclopedia.