Kids Encyclopedia Facts
This page is about the geographic region. For the university, see University of North Alabama. For that school's athletic program, see North Alabama Lions. 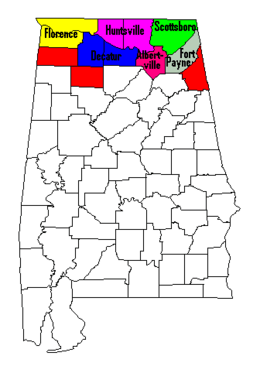 North Alabama is a region of the U.S. state of Alabama. Several geographic definitions for the area exist, with all descriptions including the nine counties of Alabama's Tennessee Valley region. The North Alabama Industrial Development Association also lists Cherokee, Cullman, Franklin, and Winston counties in the region. The Alabama Mountain Lakes Tourist Association expands the definition further to include Blount, Etowah, and Marion counties.

Huntsville is the region's largest metropolitan area. Decatur and Florence-Muscle Shoals are classified as metropolitan areas as well. Albertville, Cullman, Fort Payne, and Scottsboro are each the hubs of their own micropolitan regions. Other cities of notable size include Madison and Athens.

Locals tend to refer to this area as the "Tennessee Valley" in reference to the Tennessee River, which flows through the northernmost part of the state. Large parts of North Alabama are low upland, the eastern regions part of the Cumberland Plateau, marked by tablelands incised with gorges, some of them, such as Little River Canyon in DeKalb County, of considerable depth.

Main page: List of cities and counties in North Alabama 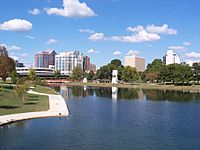 Huntsville is the largest city in North Alabama

Wilson Dam is a part of the Tennessee Valley Authority's valuable impact on the North Alabama economy.

The northern areas of Alabama contain a wide variety of industrial, manufacturing, and high-tech corporations with both large and small operations. Each of the three economic centers in the region (Huntsville, Decatur, and Florence) have a distinct type of economic base. The entire region relies heavily on row-crop, cattle and poultry production. Agribusiness plays a vital role in The Valley. Some of the largest row-crop operations in the state reside on farms in The Valley.

The Huntsville area is home to the U.S. Army’s Redstone Arsenal, the largest employer in the region, as well as NASA’s Marshall Spaceflight Center. Nearby Cummings Research Park, the second largest research park in the nation, is home to high-tech defense contracting firms such as Boeing, SAIC, and Dynetics. Huntsville has also increasingly become a center for auto manufacturing, with Toyota Manufacturing Alabama and the joint venture Mazda Toyota Manufacturing USA both located in the city.

The Decatur area, in the central part of the region, has long been a center for shipping and manufacturing due to its location on the Tennessee River. It is home to numerous industrial and manufacturing companies, including General Electric, Nucor, and 3M. Food processing facilities such as Wayne Farms and Gemstone Foods have significant facilities in the area as well. United Launch Alliance produces launch vehicles for NASA and other agencies at its manufacturing, assembly, and integration facility in Decatur. The Tennessee Valley Authority also has roots in the area.

The Florence-Muscle Shoals area, also known as "The Shoals", hosts an array of manufacturing companies, including North American Lightning, Constellium, and FreightCar America. Many residents of the Shoals are employed in healthcare and education. 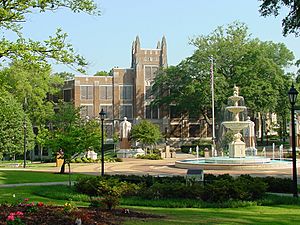 The University of North Alabama is Alabama’s oldest public university.

All content from Kiddle encyclopedia articles (including the article images and facts) can be freely used under Attribution-ShareAlike license, unless stated otherwise. Cite this article:
North Alabama Facts for Kids. Kiddle Encyclopedia.