Albertville is a city in Marshall County, Alabama, United States, and is included in the Huntsville-Decatur Combined Statistical Area. As of the 2010 census, the population of the city was 21,160.

The area which today includes Albertville was inhabited by the Cherokee Indians until their removal to Oklahoma in the 1830s. It was, however, near the territory of the Creek nation, and several major trails which afforded communication (or military action) between the two nations crossed the area. It is believed to have been crossed by Spanish explorer Hernando de Soto during his expeditions in 1540.

During the American Civil War, the area around Albertville was the scene of several mid-level clashes between Union and Confederate forces.

The first non-indigenous settlement in what is today Albertville began in the 1850s, and the settlement was named for Thomas A. Albert, an early settler who moved from Georgia and was a town leader until his death in 1876. The city was incorporated in 1891. A post office was established in 1910. 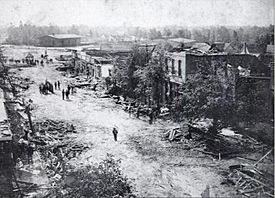 Tornado damage from “The Great Cyclone of 1908,” Albertville, Alabama.

At about 4:10 p.m. on April 24, 1908, the city was virtually wiped out by a tornado that became commonly called "The Great Cyclone," or "The Cyclone of 1908." The storm is believed to have killed 35 people across northeastern Alabama, including 15 in Albertville. Relief was largely delivered by railroad, particularly from the nearby city of Gadsden. Trains from Gadsden transported doctors, nurses, and the Queen City Guards, the Alabama militia company based in Gadsden. The commander of the latter, future Gadsden mayor and Col. R.A. Mitchell, reported in a dispatch to Governor B.B. Comer:

... The destruction of property here is, I think, unprecedented in the history of the state. I have never seen anything like it, so complete and absolute as to leave little of worth in the path of the storm through town. On viewing the wreckage, covering easily forty acres or more in the heart of town, it appears incredible that any living being could have escaped the fury of the storm and death ...

In 1893, the Alabama Legislature passed an act for the erection of an agricultural college in each of the state's Congressional districts. After some competition, Albertville was awarded the school for the Seventh District. This is the school that evolved into today's Albertville High School, whose sports teams are still known as the "Aggies."

Before the New Deal, when the Tennessee Valley Authority built Guntersville Dam, flooding on the Tennessee River would frequently leave the county courthouse in Guntersville inaccessible for residents of Albertville and other areas atop Sand Mountain. In 1919, the Alabama Legislature responded by requiring the erection of a courthouse at Albertville, in which cases arising in that part of the county would be heard.

On June 1, 2009 the city council voted to establish English as the town's official language.

On April 24, 2010, an EF-3 tornado ripped through downtown Albertville. The storm resulted in no deaths. The High School was severely damaged, nearly every home had some type of damage, and many were destroyed beyond repair.

The current slogan of Albertville is "The Pride is Alive" and can be seen on the welcome sign coming into the city.

When the 1992 Winter Olympics were held in Albertville, France, the citizens of its heteronymic counterpart in Alabama took full advantage of the opportunity to put their town on display. Mock winter games were held in this subtropical city, and one New Orleans radio station offered listeners a chance to win a trip to "the Albertville games" - those in Alabama.

All content from Kiddle encyclopedia articles (including the article images and facts) can be freely used under Attribution-ShareAlike license, unless stated otherwise. Cite this article:
Albertville, Alabama Facts for Kids. Kiddle Encyclopedia.