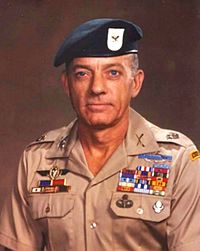 Ola Lee Mize (August 28, 1931 – March 12, 2014) was a United States Army officer. He was a recipient of the Medal of Honor for his actions in the Korean War. He was born in Marshall County, Alabama.

All content from Kiddle encyclopedia articles (including the article images and facts) can be freely used under Attribution-ShareAlike license, unless stated otherwise. Cite this article:
Ola L. Mize Facts for Kids. Kiddle Encyclopedia.