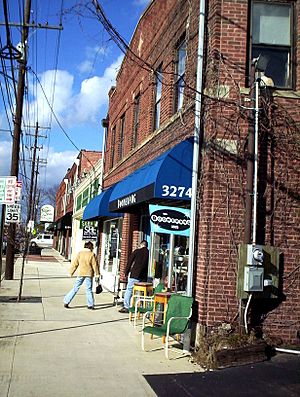 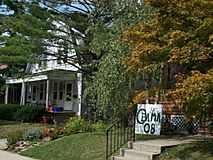 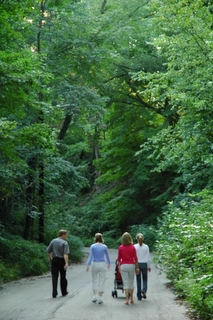 Walhalla, a ravine in Clintonville

Clintonville is a neighborhood in north-central Columbus, Ohio, United States with around 30,000 residents. Clintonville is an informal neighborhood. The southern border is loosely defined as Arcadia Avenue or the Glen Echo Ravine. To the east, either Interstate 71 or the adjacent railroad tracks are commonly accepted. The western boundary is assumed to be the Olentangy River. The northern border of Clintonville is the most ambiguous, with definitions anywhere in the 3 mi (4.8 km) stretch from Cooke Road to the southern border of Worthington. The Clintonville Area Commission boundaries, as established by Columbus City Code, are "bounded on the south by the centerline of the Glen Echo Ravine; on the east by the centerline of the railroad right-of-way immediately east of Indianola Avenue; on the north by the Worthington city limits and on the west by the Olentangy River; each line extended as necessary so as to intersect with adjacent boundaries".

As the cachet of the Clintonville neighborhood grew towards the turn of the 21st century, real estate agents began to label homes north of Cooke Road as being in Clintonville, leading to the apparent absorption of Beechwold and nearby neighborhoods south of Worthington. It was not uncommon in the booming real estate market circa 2000 to even find homes outside of the distinct east and west borders being sold as "Clintonville" homes. Because Clintonville and Beechwold have no official existence, however, the boundaries are a matter of opinion. The area also contains the former unincorporated community of Evanston, a name that was used by the Big Four Railroad as a station along its line and U.S. Postal service until the 1920s. Clintonville includes parts of ZIP codes 43202 and 43214. The United States Post Offices at the center of each ZIP code are known as Clintonville Station and Beechwold Station, respectively.

The community of Clintonville developed as the center of Clinton Township (named for the U.S. Vice President George Clinton), part of the land grants given to Continental Army soldiers in lieu of pensions in what used to be Wyandot Indian territory. For years, the steep hillsides discouraged development, until farmland was purchased by the Bull family and then used for religious services. Clinton Chapel (now a funeral home) was constructed in 1838 and served as a stop on the Underground Railroad over the next two decades. Thomas Bull, a Methodist minister, along with his wife, four sons and one of his two daughters moved to Central Ohio from Vermont in 1812. His second daughter, Chloe Brevoort and her family, joined the rest of the Bull family about a year later. The family first settled in the Worthington area while they searched for land to purchase at a suitable price. (need to cite source)

In 1813, Bull purchased 600 acres along the Columbus-Worthington Pike from John Rathbone. Before the Adams administration patented the land to Rathbone, it had been part of the United States Military Lands—land which was set aside to be given to Revolutionary War soldiers as both a pension and as a payment for their service in the War of Independence. Rathbone was a New Yorker who had never set foot in Ohio. Nonetheless, he owned a quarter section of Clinton Township which was named for George Clinton, the vice president in the Jefferson administration.

Once Thomas Bull and his family settled the land and began to farm, they were faced with a mighty problem. Namely, there was no one else around - - nowhere they could easily go to buy shoes, have blacksmith or carpentry work done—they were isolated. This isolation made the management of a 600-acre farm difficult at best.

In an attempt to draw others to the area and lessen the isolation of their farm, the Bulls built businesses in the center of Clinton Township, along the plank toll road that later became North High Street, the main north-south thoroughfare connecting Columbus to Worthington, Ohio to the north. They offered to give these buildings away to any skilled laborers who would stay. A post office designated "Clintonville" opened in the center of this district on September 13, 1847, and this date is marked by present-day Clintonville residents as the neighborhood's "birthday". (need to include sources)

By the early 1900s, downtown Columbus residents and professors from The Ohio State University had built summer homes in Clintonville and the surrounding farmland was developed into housing developments shortly after the extension of the streetcar lines northward from Columbus. A business district developed in Beechwold, separated by nearly a mile of residences from the Clintonville district to the south. Both communities were entirely part of Columbus by the 1950s after it annexed most of Clinton Township.

The topography of Clintonville is divided into two distinct regions, with North High Street forming the demarcation line. Property west of North High Street to the Olentangy River is lower in elevation than property to east of North High Street. Six glacial ravines, Glen Echo, Walhalla, Overbrook, Beechwold, Delawanda and Bill Moose Run cut through the area from east to west, with stream beds feeding into the Olentangy River. Four of the Ravines have been developed, either with public roadbeds and/or private residences, with Glen Echo being the first ravine preserved as a public park in 1913. A portion of Overbrook Ravine is part of Whetstone Park, adjacent to the Park of Roses.

Residential districts in Clintonville are divided into four distinct (and unofficial) areas: 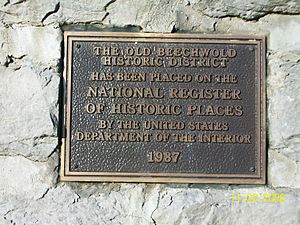 Plaque placed at the entry to Old Beechwold

Like many of the neighborhoods in Columbus, the streets were often named after either early settlers or areas of Great Britain. However, the streets in the Walhalla Park Place section of Clintonville bear the legacy of Mathias Armbruster, a Bavarian immigrant who was fascinated with Norse mythology and Wagnerian opera; these street names include Druid, Mimring, Midgard, Brynhild, Gudrun, and Walhalla.

List of early settlers who have streets named after them:

List of early land owners who have streets named after them: 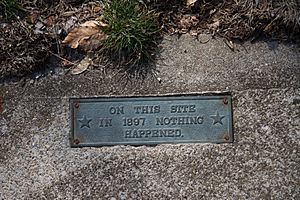 One of the curiosities of the community is a plaque in the sidewalk at the corner of Torrence Road and Brevoort Road reading "On This Site in 1897 Nothing Happened."

A commemorative historical marker for Clinton Township and Clintonville is now at the North High Street entrance driveway to the Clintonville Women's Club, the sign originally having been at the corner of East North Broadway and North High streets - a mile south of the present location.

Whetstone Park in Clintonville is a Columbus landmark. The Park includes bike trails, baseball fields and tennis courts, a pond, ravine, library and recreation facility, as well as the beautiful 13 acres (53,000 m2) Park of Roses. Opened in 1952, the Park of Roses is a frequent site for weddings and special events. In June, the Park of Roses hosts its annual "Rose Festival." During summer months concerts featuring many of Columbus' brass bands are held every Sunday evening at the Park's gazebo. Originally located at Fort Hayes, the gazebo was relocated to the park and restored in 1976. Whetstone Park also hosts an annual Fourth of July fireworks display for the Clintonville community, perhaps the largest in Columbus aside from the downtown display, Red, White, & BOOM!

Clintonville was once home to the largest amusement park in the United States. First opened in 1880 as "The Villa," by 1900, the 100-acre (0.40 km2) park and picnic ground had become Olentangy Park. This park, located along North High Street between North Street and Tulane Road, grew rapidly between 1900 and 1915 and at one time, featured four large roller coasters, including a rare looping coaster known as the "Loop the Loop", a zoo, a dance pavilion, a large "Shoot-the-Chutes" water slide, and a building from which visitors could rent canoes for a day on the Olentangy River. It was also home to the largest theatre in the country, as well as the largest swimming pool in the world at the time. Olentangy Park closed in 1939 and the land was used to build the Olentangy Village apartment complex; scattered remains of the park could still be found in the woods by the river as recently as the late 1980s. The park's carousel was moved several times and in 1999 it was restored. This carousel can now be seen at the Columbus Zoo and Aquarium.

Columbus's first zoo was located in Clintonville. Opening in May 1905, the "Columbus Zoological Gardens" was located in what is now Old Beechwold at Beechwold Road and North High Street. The zoo closed only five months later in October 1905. The only remaining structures are the zoo's monkey house, now used as a barn and located at 150 W. Beechwold Blvd., the zoo's stone entrance way, and the "kissing bridge", now Rustic Bridge Road.

All content from Kiddle encyclopedia articles (including the article images and facts) can be freely used under Attribution-ShareAlike license, unless stated otherwise. Cite this article:
Clintonville, Columbus, Ohio Facts for Kids. Kiddle Encyclopedia.