William Martin "Clu" Gulager (born November 16, 1928), is an American television and film actor and director, particularly noted for his co-starring role as William H. Bonney (Billy the Kid) in the 1960–1962 NBC television series The Tall Man and for his role as Emmett Ryker in another NBC western series, The Virginian. 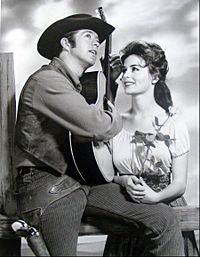 He also appeared in Peter Bogdanovich's The Last Picture Show and the racing film Winning, with Paul Newman and Joanne Woodward. Gulager was the protagonist Burt Wilson in the cult horror film The Return of the Living Dead, starred in McQ with John Wayne, and in director Don Siegel's The Killers with Lee Marvin, Ronald Reagan and Angie Dickinson. Gulager's short film A Day with the Boys was nominated for the prestigious Palme d'Or for best short film at the 1969 Cannes Film Festival.

All content from Kiddle encyclopedia articles (including the article images and facts) can be freely used under Attribution-ShareAlike license, unless stated otherwise. Cite this article:
Clu Gulager Facts for Kids. Kiddle Encyclopedia.