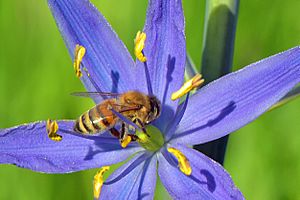 Colony collapse disorder (CCD) is the phenomenon that occurs when the majority of worker bees in a colony disappear and leave behind a queen, plenty of food and a few nurse bees to care for the remaining immature bees and the queen. While such disappearances have occurred throughout the history of apiculture, and were known by various names (disappearing disease, spring dwindle, May disease, autumn collapse, and fall dwindle disease).

The syndrome was renamed colony collapse disorder in late 2006 in conjunction with a drastic rise in the number of disappearances of western honey bee (Apis mellifera) colonies in North America. European beekeepers observed similar phenomena in Belgium, France, the Netherlands, Greece, Italy, Portugal, and Spain, Switzerland and Germany, albeit to a lesser degree, and the Northern Ireland Assembly received reports of a decline greater than 50%.

Several possible causes for CCD have been proposed, but no single proposal has gained widespread acceptance among the scientific community. Suggested causes include: infections with Varroa and Acarapis mites; malnutrition; various pathogens; genetic factors; immunodeficiencies; loss of habitat; changing beekeeping practices; or a combination of factors. A large amount of speculation has surrounded a family of pesticides called neonicotinoids as having caused CCD. 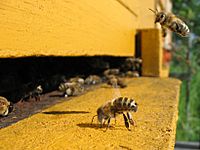 Colony collapse disorder causes significant economic losses because many agricultural crops (although no staple foods) worldwide are pollinated by western honey bees. According to the Agriculture and Consumer Protection Department of the Food and Agriculture Organization of the United Nations, the worth of global crops with honey bee pollination was estimated at close to $200 billion in 2005. Shortages of bees in the US have increased the cost to farmers renting them for pollination services by up to 20%.

After bee populations dropped 23% in the winter of 2013, the Environmental Protection Agency and Department of Agriculture formed a task force to address the issue. In the six years leading up to 2013, more than 10 million beehives were lost, often to CCD, nearly twice the normal rate of loss. However, according to Syngenta and the F.A.O., the total number of beehives worldwide continues to grow. An insecticide produced by Syngenta was banned by the European Commission in 2013 for use in crops pollinated by bees. Syngenta together with Bayer is challenging this ban in court.

Early in 2013, the European Food Safety Authority issued a declaration that three specific neonicotinoid pesticides pose an acute risk to honeybees, and the European Commission (EC) proposed a two-year ban on them. David Goulson, who led one of the key 2012 studies at the University of Stirling said that the decision "begs the question of what was going on when these chemicals were first approved." The chemical manufacturer Bayer said it was "ready to work with" the EC and member states.

Studies in Europe and North America have shown dramatic declines in bee colonies. The U.S. has lost 59% of its bee colonies since 1947, and Europe has lost over 25% since 1985. Determining the causes of bee colony collapse is crucial to the global economy, as bee pollination assists with 9.5% of the global agricultural production worth billions of dollars.

Through ecological modeling and retrospective studies, research has shown a link between bee colony collapse and climate change. Although the shifting weather conditions themselves negatively affect bees, the link between colony collapse and climate change is also closely tied to the interaction between bees’ climatic niches and food-plant reductions. Climate change affects the floral environment by stunting flower development and nectar production, which in turn directly impacts colonies’ abilities to collect pollen and sustain themselves. 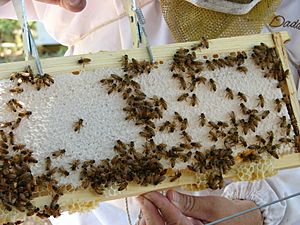 Visit to a bee colony in West Virginia

In collapsed colonies, CCD is suspected when a complete absence of adult bees is found in colonies, with little or no buildup of dead bees in the hive or in front of the hive. A colony that has collapsed from CCD is generally characterized by all of these conditions occurring simultaneously:

Precursor symptoms that may arise before the final colony collapse are:

Since U.S. beekeeper Nephi Miller first began moving his hives to different areas of the country for the winter of 1908, migratory beekeeping has become widespread in America. Bee rental for pollination is a crucial element of U.S. agriculture, which could not produce anywhere near its current levels with native pollinators alone. U.S. beekeepers collectively earn much more from renting their bees out for pollination than they do from honey production.

Researchers are concerned that trucking colonies around the country to pollinate crops, where they intermingle with other bees from all over, helps spread viruses and mites among colonies. Additionally, such continuous movement and re-settlement is considered by some a strain and disruption for the entire hive. 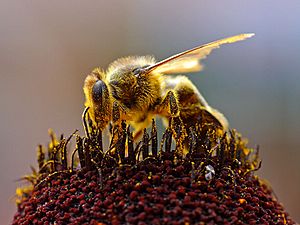 Honey bees are not native to the Americas, therefore their necessity as pollinators in the U.S. and other regions in the Western Hemisphere is limited to strictly agricultural/ornamental uses. The phenomenon is particularly important for crops such as almond growing in California, where honey bees are the predominant pollinator and the crop value in 2011 was $3.6 billion.

In 2000, the total U.S. crop value that was wholly dependent on honey bee pollination was estimated to exceed $15 billion. Because of such high demand in pollinators, the cost of renting honey bees has increased significantly, and California's almond industry rents approximately 1.6 million honey bee colonies during the spring to pollinate their crop. Worldwide, honeybees yield roughly $200 billion in pollination services. 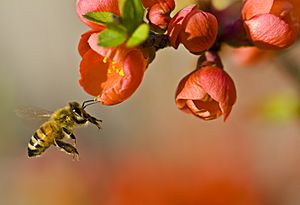 They are responsible for pollination of approximately one third of the United States' crop species, including such species as almonds, peaches, apples, pears, cherries, raspberries, blackberries, cranberries, watermelons, cantaloupes, cucumbers, and strawberries.

Honeybees perform some level of pollination of nearly 75% of all plant species directly used for human food worldwide. Catastrophic loss of honeybees could have significant impact, therefore; it is estimated that seven out of the 60 major agricultural crops in North American economy would be lost, and this is only for one region of the world.

All content from Kiddle encyclopedia articles (including the article images and facts) can be freely used under Attribution-ShareAlike license, unless stated otherwise. Cite this article:
Colony collapse disorder Facts for Kids. Kiddle Encyclopedia.