Colton is a district of east Leeds, West Yorkshire, England, situated between Cross Gates to the north, Halton and Halton Moor to the west, Whitkirk to the north-west and Austhorpe to the north-east. Temple Newsam lies directly south of the estate.

The small Whitkirk Lane End estate (which is situated between Colton Road and Colton Roundabout) is often considered more part of the Colton district than Whitkirk, because of its separation from Whitkirk via Selby Road, and its proximity to Colton Road.

Colton was mentioned in the Domesday Book as 'Coletun', and was originally a medieval farming village. It consists mainly of cul-de-sacs, with inter-linking ginnels, back alleys and housing ranges from detached houses, semi-detached houses, terraced houses, and flats. The area is 4 miles to the east of Leeds city centre, and is close to the A63 dual carriageway and M1 motorway. Colton is also the area of Leeds, where the Leeds Outer Ring Road terminates. The area is well served by buses, with the numbers 19 and 19A going to and from the city centre, and the number 9 going to and from Seacroft.

At the centre of the estate, there is a cricket club, with a bar, a cricket pitch, two tennis courts and a football pitch. Much of the open space in Colton has been built upon, making it a much more urban area. In the mid-1990s, Colton Retail Park was opened in the east of the district, now with many well known stores. Recently, Thorpe Park business park was also opened in the east of Colton.

Colton Road is a derelict road running through the west of the area into Whitkirk. It joins onto Selby Road, although it has been closed from the edge of Colton and Whitkirk to Meynell Road, where it terminates in the centre of the estate. It is locally referred to as 'The Old Road','The Red Road' or 'The Wide Path'. 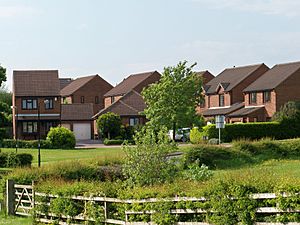 All content from Kiddle encyclopedia articles (including the article images and facts) can be freely used under Attribution-ShareAlike license, unless stated otherwise. Cite this article:
Colton, Leeds Facts for Kids. Kiddle Encyclopedia.