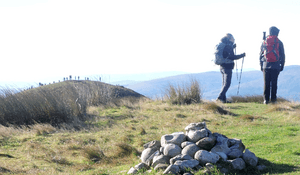 It is on the east bank of Loch Lomond, beside the village of Balmaha. It is a sharp little summit which is on the Highland Boundary Fault. There was a tiny cairn at the top (361 m or 1,184 ft); as of February 2019[update] there is only a scattering of stones to mark the "true" summit. Most visitors also stop on a sub-summit at 358 m (1,175 ft).

From the top, it offers impressive views over Loch Lomond and towards Glasgow; on a clear day it is even possible to see Goat Fell on Arran, about 50 miles (80 kilometres) southwest. In addition, the rounded outline of Ailsa Craig in the Clyde Estuary is sometimes visible.

It is accessible for walking, and forms part of the West Highland Way. During the lambing season, dogs are not allowed in the two enclosed fields on the east approach to Conic Hill, even if they are on a lead. The season normally lasts for around three weeks at the end of April and early May. However, this does not affect access with a dog to Conic Hill from the Balmaha direction.

The hill is accessible by public transport, with buses and ferries arriving in Balmaha. There is also a car park at the base, allowing those with vehicles a place to park before climbing the hill.

In August 2013, 8 members of Deafblind Scotland ascended the hill with help from rangers and guides.

All content from Kiddle encyclopedia articles (including the article images and facts) can be freely used under Attribution-ShareAlike license, unless stated otherwise. Cite this article:
Conic Hill Facts for Kids. Kiddle Encyclopedia.