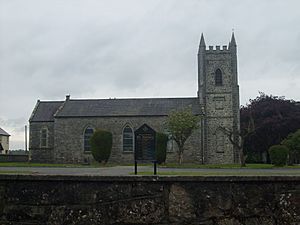 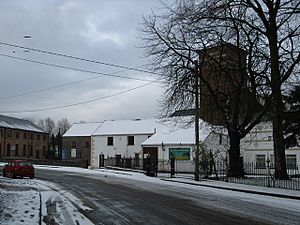 Convoy (Irish: Conmhaigh, "plain of hounds") is a village in the east of County Donegal, Ireland, in the Finn Valley district. It is part of the Barony of Raphoe South. It is situated on the Burn Dale (also known as the Burn Deele), and is located on the R236 road to Raphoe.

Convoy had a total population of 1,526 according to the 2016 census. Like many other villages in the vicinity, it has its origins in the Plantation of Ulster. Convoy is home to a mixed religious community which is reflected in the schools and churches in the village.

There is a Catholic and a mixed primary school in the village. There is also a Catholic church (popularly known as 'the Chapel'), a Church of Ireland church and a Free Presbyterian Church of Ulster church or 'kirk' (which was opened by the Church's founder, The Rev. Ian Paisley) in the village. There is also a Reformed Presbyterian Church in Ballyboe. There are no secondary schools in Convoy and local children tend to travel to Raphoe or Stranorlar for second-level education.

The Burn Dale (also known in English as the Burn Deele) is a burn (a small river) that flows along the southern edge of Convoy.

Convoy once had a woollen mill located on the banks of the Burn Deele (also spelled as the Burn Dale), but this closed in the early 1980s with the resultant loss of many local jobs. Most people who lived in Convoy worked in the Convoy Woollen Mill and what economy there was managed to sustain a couple of shops and the Post Office. If one did not work in the Mill or manage to get casual labouring jobs in one of the farms outside the village, one had little choice but to emigrate, to either building work in England or Scotland or to the promise of something better in America. The woollen mill is now host to a business area that has been promoted and assisted by the state development body FÁS.

The Montgomery family of Convoy is descended from Alexander Montgomery, Prebendary of Doe, who died about 1658. He was brought over from Scotland by his kinsman, George Montgomery, who became the first Protestant Bishop of Raphoe in 1604. Alexander Montgomery of Croaghan, near Lifford, bought the Convoy estate from the Nesbitt family in 1719. Boyton House was first occupied in November 1807 by the family of Robert Montgomery of Brandrim who had inherited the estate form his cousin, Sandy Montgomery of Convoy.Sandy represented Donegal in Grattan’s parliament for thirty two years. He spent part of his youth in America and was noted for his duelling. His brothers were John of Lisbon and Richard, a general in Washington’s army who fell at the siege of Quebec in 1775. Sandywas a friend of Lord Edward Fitzgerald and a secret supporter of the United Irishmen. He voted against the Act of Union in 1800. Boyton House used to contain the letter which Washington wrote to the family on Richard’s death and receipts for meat bought by thehundred-weight in Raphoe by the Montgomery family for free distribution in Convoy during the Famine. The house passed through marriage to the Boyton family in the nineteenth century.

There are daily Bus Éireann buses serving Convoy which go to such places as Derry, Letterkenny and Strabane several times a day.

Naomh Mhuire Conmhaigh is the local GAA club. Founded in 1928 the players of this Gaelic football club come from the villages of Convoy, Drumkeen and Raphoe with the pitch located in Convoy. The club has won several junior titles.

Convoy has a local amateur soccer team, known as Convoy Arsenal. The club were Donegal Junior League winners in 2003, won the Division One title in 2004, and were runners-up in the premier division in 2005. Convoy Arsenal subsequently joined the Ulster Senior League in 2005. They also field teams in the Donegal Saturday League in several underage grades.

All content from Kiddle encyclopedia articles (including the article images and facts) can be freely used under Attribution-ShareAlike license, unless stated otherwise. Cite this article:
Convoy, County Donegal Facts for Kids. Kiddle Encyclopedia.