Coombabah is a suburb in the City of Gold Coast, Queensland, Australia. In the 2016 census, Coombabah had a population of 10,388 people.

Surrounding Coombabah is Paradise Point and Hope Island to the north, Arundel to the south, Runaway Bay and Biggera Waters to the east and Helensvale to the west and the Coombabah State High School. The minor arterial road servicing Coombabah is Oxley Drive.

The suburb takes its name from Coombabah Lake and Coombabah Creek, which in turn are named using Bundjalung language, Ngaraangbal dialect words meaning place of the wood grubs, from the word goombo meaning teredo worm, which was a deliberately cultivated food source by the Indigenous people.

Coombabah Provisional School opened circa July 1887 as a special school for the children of parents who were employed in Public Works in the area. The school was moved to Acrobat Creek and re-opened on 10 Jan 1889 as Acrobat Creek Provisional School for the children of workers building railways in the area. It closed in September 1890. 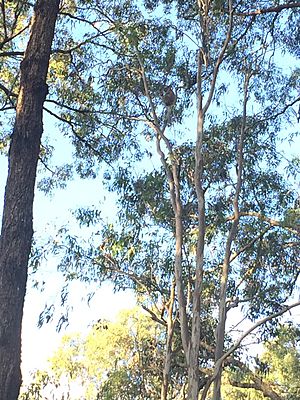 Sometimes called Coombabah lake, the Coombabah Lakelands is one of only five sites in Queensland included in the Ramsar international convention for significant wetlands. The conservation area is surrounded by homes, roads and businesses. The land was bought by Council in the 1980s as a buffer zone for a sewerage plant. In 1994 that Council declared the Coombabah Lakeland Conservation Area. The integrity of the conservation and animal habitat is overseen by several Authorities. There are ten kilometres worth of dirt tracks, gravel and boardwalks for access by the public. For marine habitat the area is a protected fish habitat under the Queensland Fisheries Act and a protected marine conservation and habitat zone under the Moreton Bay Marine Park Zoning plan. Guided bush walks day and night are run by the council's Natural Areas Management Unit. Three is a carpark on Rain Tree Glen for access to tracks. 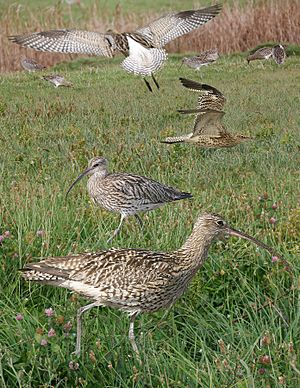 Griffith University's Healthy Rivers Institute conduct ongoing research in the area. Over 150 bird species use the area, so conservation of the wetlands aims to ensure migratory birds can use the area, and will continue to come. Coombabah is also part of migratory bird agreements with China and Japan. The threatened migratory eastern curlew rests at Coombabah on its way to Russia or north-eastern China breeding grounds. A bird hide is accessed off Shelter Road. Brisbane/Gold Coast branch of Bird Observation and Conservation Australia organise guided bird watching visits.

All content from Kiddle encyclopedia articles (including the article images and facts) can be freely used under Attribution-ShareAlike license, unless stated otherwise. Cite this article:
Coombabah Facts for Kids. Kiddle Encyclopedia.