Cornelis de Houtman (2 April 1565 – 1 September 1599), brother of Frederick de Houtman, was a Dutch explorer who discovered a new sea route from Europe to the East Indies, and who thus begun the Dutch spice trade. At the time, the Portuguese Empire held a monopoly on the spice trade, and the voyage was a symbolic victory for the Dutch, even though the voyage itself was a disaster. Houtman was also a spy, having worked against the Portuguese by bringing back to the Netherlands privileged nautical information obtained during his stay in Portugal.

In 1592, De Houtman was sent by Amsterdam merchants to Lisbon to discover as much information on the Spice Islands as he could. Portugal and Spain, then united, had closed their ports to Dutch ships in 1585, in the context of the Eighty Years' War. Houtman spent about two years in Portugal; the Portuguese needed help and did not realize that the Dutch represented a risk. When Houtman returned to the Netherlands he brought with him precious information about the seas and lands of the East: the coasts, the reefs and skerries, the sea currents, the winds, landmarks, local birds, friendly and enemy foes and about the strengths and weaknesses of the Portuguese.

At the same time he returned to Amsterdam, Jan Huygen van Linschoten returned from India. The merchants determined that Bantam provided the best opportunity to buy spices. In 1594, the two merchants founded the Compagnie van Verre, and on 2 April 1595, four ships left Amsterdam: the Mauritius, Amsterdam, Hollandia, and the Duifje. 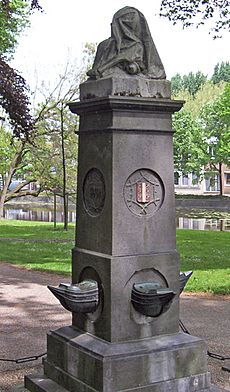 Monument to the De Houtman brothers in Gouda

The voyage was beset with trouble from the beginning. Scurvy broke out after only a few weeks, due to insufficient provisions. At Madagascar, where a brief stop was planned, seventy people had to be buried. The Madagascan bay where they were anchored is now known as the Dutch cemetery. After the death of one of the skippers, quarrels broke out among the captains and traders, one was imprisoned on board and locked up in his cabin. In June 1596, the ships finally arrived at Banten, a northwestern port at Java. Jan Huyghen van Linschoten had told them not to pass through the Malacca Strait, which was controlled by the Portuguese, but through Sunda Strait.

De Houtman was introduced to the Sultan of Banten, who promptly entered into an optimistic treaty with the Dutch, writing "We are well content to have a permanent league of alliance and friendship with His Highness the Prince Maurice of Nassau, of the Netherlands and with you, gentlemen." The local Portuguese traders became very suspicious when De Houtman did not buy any black pepper, and wanted to wait on the next harvest. Unfortunately, De Houtman was undiplomatic and insulting to the sultan, and was turned away for "rude behaviour", without being able to buy spices at all.

The ships then sailed east to Madura, but were attacked by pirates on the way. In Madura, they were received peacefully, but De Houtman ordered his men to brutally attack the civilian population in revenge for the unrelated earlier piracy.

The ships then sailed for Bali, and met with the island's king. They managed to obtain a few pots of peppercorns on 26 February 1597. Two of the crewmembers stayed on the island. At Bawean one of the ships, the Amsterdam was purposely set on fire, and the crew divided over the other three ships. When the sailors had enough of the exhausting voyage, it was decided not to go to the Moluccas and return to Holland. That evening another one of the skippers died. De Houtman was accused of poisoning him.

Portuguese ships prevented them from taking on water and supplies at Saint Helena. Out of the 249 men crew, only 87 returned, too weak to moor their ships themselves.

Though the trip was a humanitarian disaster and financially probably just broke even, it was a symbolic victory. It may be regarded as the start of the Dutch colonisation of Indonesia. Within five years, 65 more Dutch ships had sailed east to trade. Soon, the Dutch would fully take over the spice trade in and around the Indian Ocean.

On his second trip to the East in 1599, for a different company, De Houtman and his troops arrived in Aceh. The Sultan accepted him peacefully until de Houtman insulted him. He had already clashed with the Banten Sultanate in northwest Java before his arrival in Aceh, and, feeling arrogant, escalated the situation by challenging the Sultan. This led to his defeat at the hands of the Sultan's daughter, Admiral Keumalahayati, and her Inong Balee Army. Because of that incident, Queen Elizabeth I of England decided against direct colonisation and opted to send an emissary to the Sultan of Aceh instead, asking permission to enter Malacca Strait.

All content from Kiddle encyclopedia articles (including the article images and facts) can be freely used under Attribution-ShareAlike license, unless stated otherwise. Cite this article:
Cornelis de Houtman Facts for Kids. Kiddle Encyclopedia.