Kids Encyclopedia Facts
For the original county in the UK, see Cornwall.
Not to be confused with Cornwall, Tasmania.

Cornwall Land District is one of the twenty land districts of Tasmania which are part of the Cadastral divisions of Tasmania. It contains most of Launceston. It was formerly Cornwall County, one of the 18 counties of Tasmania and one of the first eleven proclaimed in 1836. It was named after the then southwestern county of England.

An earlier Cornwall County existed from 24 September 1804 until 4 February 1813 as an administrative division whilst Van Diemen's Land was administered as two units. It was defined as all of Van Diemen's Land north of the 42nd parallel (now between Trial Harbour and Friendly Beaches), and governed by William Paterson. Buckingham County occupied the remainder of the island. 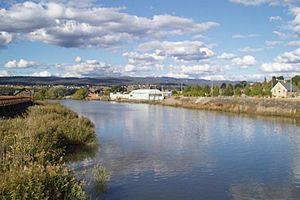 The North Esk River, the boundary between Cornwall and Dorset

It is bordered to the north by the North Esk River, and to the south by the South Esk River. While most of Launceston is in it, it does not include suburbs to the north of the North Esk such as Mayfield which is in Dorset; and suburbs to the west of the South Esk such as Trevallyn, which is in Devon. It goes east to the Tasman Sea, including St Helens and St Marys.

The 1911 Encyclopædia Britannica mentions Launceston as being in the county.

There was, until 1999, a state electoral division of Cornwall occupying a similar area to the district.

The townships of Launceston, Hadspen, Perth, Avoca (portion of) were delimited in the same proclamation.

All content from Kiddle encyclopedia articles (including the article images and facts) can be freely used under Attribution-ShareAlike license, unless stated otherwise. Cite this article:
Cornwall Land District Facts for Kids. Kiddle Encyclopedia.